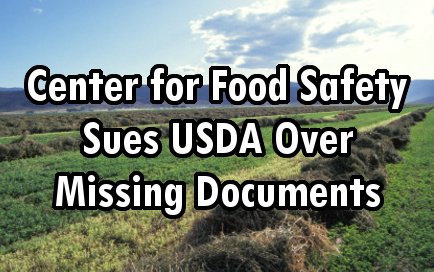 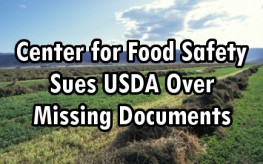 Like many Americans, you may be beating your head against the wall trying to figure out how governmental agencies could so blatantly ignore the facts concerning GMO dangers. A new lawsuit filed March 12, 2014 by Center for Food Safety (CFS) demands that federal documents be released which might incriminate the United States Department of Agriculture over findings that GMO were harmful, while shielding the public from this knowledge. The complaint is filed with the US District Court for the District of Columbia, and can be viewed in full, here.

The lawsuit attests that political pressure was asserted on the FDA to approve genetically engineered alfalfa. It seeks 1179 documents from the USDA’s Animal and Plant Health Inspection Service (APHIS) which explain why the agency reversed its original decision to deny GMOs, specifically RoundUp Ready Alfalfa, being promoted by Monsanto. The Director of CFS, Andrew Kimbrell, states:

“USDA determined Monsanto’s Roundup Ready alfalfa posed significant environmental and economics harms and initially proposed placing restrictions on it. Yet the agency went ahead and granted full unrestricted approval one month later. Did the White House intervene? Did Monsanto pressure the agency? The fact is we don’t know, and unless the court orders USDA to hand over these documents we may never know,”

In 2005, the USDA agency, APHIS, gave Monsanto permission to sell their poison alfalfa under the name RoundUp Ready. The very next year, CFS, along with a coalition of farmers, challenged the approval. And even though Monsanto tried to intervene, courts sided with the Center for Food Safety. APHIS was ordered to complete a thorough analysis of the GMO crop’s impacts on farmers and the environment before making a decision.

Sadly, Monsanto got its way after appealing the decision at the Supreme Court level, even though the APHIS report showed significant damage to agronomics and the environment at large. The report recommended restrictions of this Monsanto crop.

In January of 2011, APHIS reversed its decision in favor of Monsanto, seemingly ignoring all the data they had uncovered showing that GMO alfalfa was not good for the environment, farmers, or consumers. They even stated that they ‘had no choice’ but to grant unrestricted approval. Alternative media then questioned the abrupt reversal, raising questions of undue influence.

“APHIS’s sudden change of heart on the approval of Roundup Ready alfalfa has led to the contamination of organic and conventional alfalfa to the detriment of U.S. farmers, and threatens the health of our environment and the survival of sensitive species,” said Sylvia Wu, attorney for Center for Food Safety. “The public deserves an explanation from the agency. APHIS cannot be allowed to disregard the public’s right to access governmental records guaranteed by the Freedom of Information Act.”

While it isn’t corn, wheat, or soy, alfalfa is the fourth most commonly grown GMO crop in the US. It is grown in every US state and asserts huge economic outcomes on farmers who grow it. Data now shows that 90% of all alfalfa grown in the US is covered in Round Up Ready chemicals.