How to Stop Hay Fever This Fall – 13 Natural Tips

Which tips work best for you?

Autumn is ragweed season, so stay tuned for red, itchy eyes and a runny nose. Up to 30% of people suffer from allergic rhinitis – you know, hay fever – and for people in the eastern U.S., it can be especially miserable. But if you know how to stop hay fever, you should be able to cruise through the season without a problem.

“The thing with ragweed is it’s just such a big pollen producer,” says Dr. Timothy Craig, an allergist and professor of medicine and pediatrics at Penn State University in Hershey, Pennsylvania. “That’s why it’s such an issue for people east of the Rocky Mountains.”

Up to a billion pollen grains can come from a single ragweed plant. The plants give off most of their allergens starting in mid-August and peaks in mid-September. If there’s a mild spring and a late frost, like the Northeast experienced this year, it can make hay fever season drag on even longer.

Fall molds that grow on wet leaves and decomposing plants are also a problem this time of year.

Failing to cope with hay fever can produce long-term complications. People who have allergic rhinitis tend to have more nasal polyps, ear infections, and sleep disorders, including snoring and sleep apnea. Additionally, untreated hay fever can result in mouth breathing, a dental overbite, and chronic swelling in the nasal passages. It also puts you at increased risk for asthma and other allergies. [1]

How to Stop Hay Fever

But you can avoid some of the triggers that plug up your nose and make your eyes water. Craig recently gave CBS News a few tips for how you can feel a little bit better this fall. Here are 6 tips on how to stop hay fever. [2]

1. Keep Your Car Windows Rolled Up

As good as it feels to let the crisp Autumn air blow through your hair while you’re driving, it collects an awful lot of pollen. So, keep the air conditioner on and the windows closed. “When you’re driving in the car, you’re just collecting lots of pollen, so that’s the worst thing you can do is drive with windows open,” says Craig.

2. Watch the Weather…and the Mold and Pollen Counts

Flip on The Weather Channel to find out whether it might be a good idea to stay indoors on any particular day. Craig says that allergies are less severe on damp, wet days, when the moisture keeps pollen from floating around. “If it’s going to be a warm, windy, dry day which is sunny, that’s when you know that the ragweed’s going to be high,” he says.

3. Work out in the Morning

Early morning is reportedly often the best time to exercise outdoors because the wind usually hasn’t picked up yet.

4. Get Your Kids to Rake the Yard

It’s a pain anyway, so just don’t do it. That’s what your kids (or your spouse, or the kid down the street) are for. Raking leaves and mowing lawns are hazardous to allergy sufferers’ health. 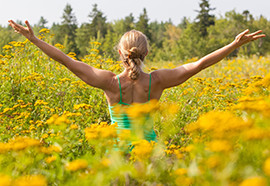 Change your clothes and take a shower after being outdoors during ragweed season. If you don’t, you’ll wind up scattering it all over the house and bringing it into your bed with you.

6. Reach for Over-the-Counter Antihistamines Before it’s too Late

OTC antihistamines can help ease the symptoms of hay fever, but they work better if you take them before you start feeling sick. Of course we would first recommend to experiment with natural hay fever remedies – so here are 7 of them (click the link).

“When you preempt the season you do much better than if you wait until you’re already symptomatic,” Craig says. “So you can get an idea when to start the medications based on the year before, when the pollens started to be identified on pollen counters.”

7 More Tips on How to Stop Hay Fever

Need more on how to stop hay fever? Here are a few other tips to help you cope with (and hopefully prevent) hay fever: