6 Tips on How to Stop Restless Legs Syndrome Naturally

Restless legs syndrome (RLS), thought to be a neurological disorder, is exactly what it sounds like. The condition gives sufferers an irresistible urge to move their legs. Sometimes RLS feels like there is something crawling on the legs. It may feel like pulling, throbbing or itching. The disorder can cause deep aches, too. And especially unlucky RLS sufferers may feel these symptoms all over their body.

Because RLS is relieved by moving the affected limbs, it often means sleepless nights, uncomfortable plane rides, and miserable days at the office.

Scientists aren’t sure what causes RLS. It’s believed to be genetic, and is often found in families where the onset of symptoms is before age 40. Research suggests that RLS is related to a dysfunction in the brain’s basal ganglia that use the neurotransmitter dopamine. RLS is commonly found in patients with Parkinson’s disease, which is another disorder of the basal ganglia’s dopamine pathways. [1]

Some chronic diseases, such as diabetes, kidney failure, and peripheral neuropathy are associated with RLS. Some medications have also been found to aggravate restless legs syndrome; antipsychotics, anti-nausea drugs, and cold and allergy medications are big offenders. Pregnancy also seems to trigger RLS, particularly in the last trimester.

While there are drugs on the market that are supposed to treat RLS, there is no one medication that has been found to manage the symptoms of the disorder for all patients. Some of these drugs may also lose their effectiveness over time, and as expected, come with side effects.

Fortunately, there are some tried-and-true home remedies that many RLS sufferers swear by. Some of them are a little bit bizarre, but most people with restless legs will tell you they’re willing to try anything once.

1. Put a Bar of Soap under the Bedsheets 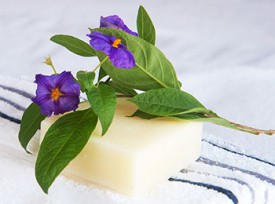 I warned you that some of these were weird. Many people say that putting a bar of soap under their bottom sheet helps stave off RLS, not to mention leg cramps. There’s no scientific evidence to back this up, but it certainly can’t hurt to try.

Don’t sit in one position for too long. Get moderate exercise, but be warned: heavy exercise has been shown to cause RLS symptoms. Avoid caffeine, tobacco and alcohol, which are all reported RLS triggers.

3. Stick to a Strict Nighttime Schedule

Since RLS disrupts the sleep cycle, it’s important to go to bed at the same time every night, and to wind down before hitting the sheets. Remove digital clocks, electronics that glow, and anything work-related from the bedroom. The bedroom should be for sleep and intimacy only. 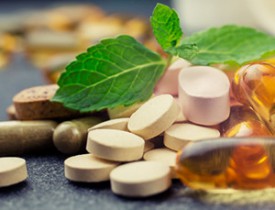 Some evidence suggests that RLS may be caused by an iron deficiency or a magnesium deficiency, so taking a supplement for both may be useful. (Talk to your doctor about a simple blood test to determine if your levels are low.) Folic acid and vitamin B can also help. It’s important to talk to your doctor first, because taking too many of these vitamins and minerals could damage your health (especially if they are in synthetic form, as most are). [2]

We’re not sure why this works, but at least it’s a fun treatment. It could be the dopamine that’s released during intimacy, or the relaxation that follows a physical encounter. [3]

Switching from hot to cold or from cold to hot may help RLS symptoms. If your legs are cold, put on a pair of warm pants, or try using a heating pad. If you’re legs are warm, drape a cool towel over them or dip your feet in cool water.