Memorial Day Weekend was a bust for those who had plans to go for a dip in the Ohio River after health officials in Cincinnati and Northern Kentucky told people to stay out of the water due to a toxic algae bloom. Now, that advisory has been extended, as conditions favorable to the formation of blue-green algae persist.

Not that you’d want to jump into the river anyway. The water appears to have thick mats of scum floating on the surface. Toxic algae blooms can also resemble spilled paint, discolored or colored streaks on the water, or green globs floating below the surface. [1]

The advisory was significantly expanded to include Northern Kentucky up through the Markland Dam, 75 miles up-river from Louisville.

Peter Goodmann, director of the Kentucky Division of Water, said biologists had detected algae blooms in the McAlpine Pool near Louisville. So far, the levels aren’t concerning. [2]

If water contaminated with toxic algae is swallowed, it can cause gastrointestinal problems, such as nausea, vomiting, stomach pain, and diarrhea. Contact with the algae could also result in skin, eye, and throat irritation and/or breathing difficulties.

Elderly people and individuals with compromised immune systems are especially susceptible to the effects of contact with toxic algae blooms.

Local residents were asked to not swim, wade or boat in the affected areas. 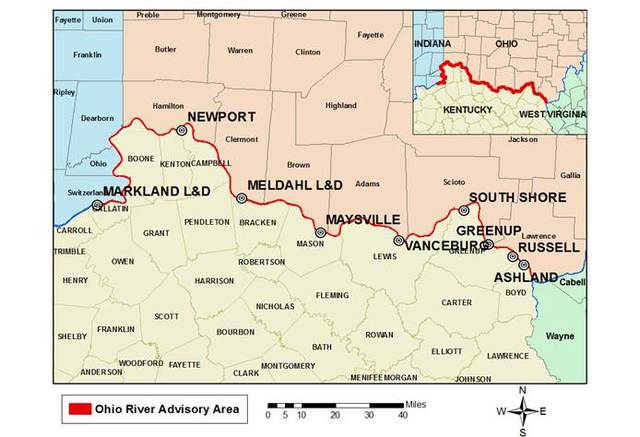 The Kentucky Division of Water first detected the toxic algae blooms on August 31, on the Ohio River near Greenup. Higher levels of microcystin toxins were detected in some areas of the Ohio River from Ashland to the Meldahl Dam. On September 4, KDOW issued a recreational advisory stretching from the West Virginia line to Meldahl Dam.

No microcystin toxins have been detected in the public water system, but the raw water is being treated out of an abundance of caution.

Blue-green algae are normally a good thing. It occurs naturally in the environment and is an important part of the ecosystem. Excess nutrients (phosphorus and nitrogen), sunny conditions, warm temperatures, and low-flow or low-water conditions can all contribute to the development of harmful algal blooms.

“If you plan to eat fish caught from the Ohio River, remove the guts and liver, and rinse fillets in tap water before eating. Activities near the river such as camping, picnicking, biking and hiking are safe. If you are picnicking, wash your hands before eating if you have had contact with river water or shore debris.

If you’re on the river, you should rinse off as soon as you’re finished swimming or boating. And if you or a pet gets sick, contact your doctor or veterinarian.”