GMO “Super Wheat” to be Grown in the UK Despite Fears

Trials will take place despite protests from 30 green groups

The British government has approved the planting of a new experimental crop of genetically modified “super wheat” despite fears that it could contaminate other crops and despite opposition from about 30 environmental groups. [1]

The GM wheat, engineered to use sunlight more efficiently, will be tested by researchers in Hertfordshire. The crops are touted for boosting yields by as much as 20% to 40% in the greenhouse.

“It makes the plant bigger in the greenhouse, it makes the leaves grow bigger, and that’s because you have more of this photosynthesis going on. Once you start to produce grain all of that CO2 fixation starts to get targeted into the production of more grain. You end with bigger plants and more grain.”[1]

Scientists also added an antibiotic marker gene to the wheat as well as genes that make it resistant to some herbicides. [2]

Resistance to herbicides (e.g., glyphosate, found in Monsanto’s Roundup) has caused some concern, as the GM plants “do not easily rid themselves of the Roundup they absorb.” The toxin remains in the plants, causing them to have less chlorophyll and thus less photosynthesis. Moreover, GM plants have a reduced content of protein and micronutrients than non-GM plants do. This means that animals or humans who eat such plants are getting less nutrition than they could from non-GM plants. [3]

“There is also concern as to the potential toxicity that ingesting plants that have absorbed glyphosate may have on animals and humans. Glyphosate is combined with other chemicals to enhance its activity and research indicates this combination of chemicals has toxic effects on organisms that consume plants genetically modified to handle herbicides.” [3]

In the fall of 2016, scientists at Rothamsted Research applied to the Department of the Environment, Food and Rural Affairs (DEFRA) for permission to plant the GM wheat in a small field near Harpenden. Following an independent risk assessment and public consultation, the application was granted. [1]

In the United States, farmers have rejected the genetically engineered wheat for fear that shoppers will also reject it. Now opponents worry that British wheat sales and exports will take a hit if crops are contaminated with genes from the engineered plants. The U.S. has faced this same concern in recent years. [2]

Unauthorized “Roundup-ready” wheat has been discovered growing in U.S. fields at least four times. When the wheat, which is designed to withstand the Monsanto-made herbicide Roundup, was discovered in Oregon, Monsanto insultingly blamed activists for the escape, saying they had deliberately dispersed the seeds.

The debacle negatively affected the U.S. wheat trade overseas, as some countries have banned GMOs entirely and refused to import U.S. wheat.

GM Freeze, representing 30 green groups, had been calling on ministers to deny permission for the wheat trial by arguing that GMOs are not the solution to global food shortages. That problem, the groups say, can be resolved by addressing food waste, poverty, and other systemic issues. [1] 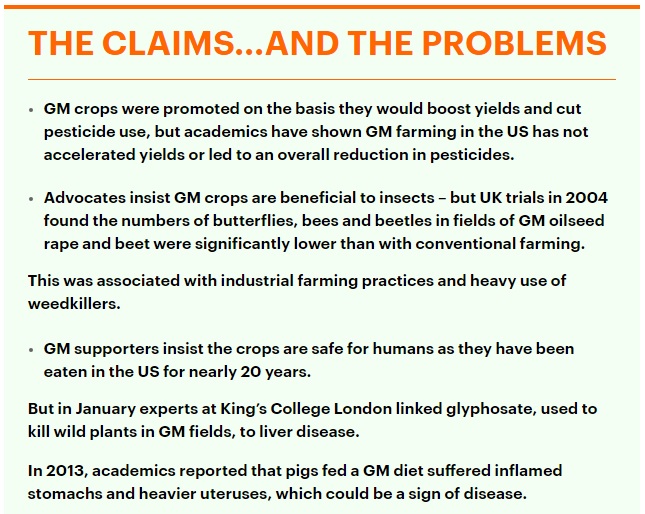 “People aren’t starving because photosynthesis isn’t efficient enough; people are starving because they are poor. Techno-fixes like GM wheat suck up public funding that could make a real difference if it was spent on systemic solutions like waste reduction and poverty eradication. Then we could all enjoy food that is produced responsibly, fairly and sustainably.”

Other types of GM wheat have been tested in the past, and not always successfully. Rothamsted Research created a type of wheat a few years ago that was aimed at deterring aphids, which destroy wheat crops. However, it turned out to be a $5 million failure. The “whiffy wheat,” as it was called, succumbed to the same level of aphid damage as traditional wheat.