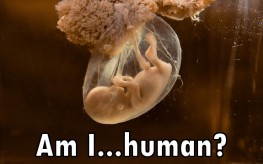 With the human race slowly being killed off by GMO food, environmental poisons, petroleum, plastics, chemtrails, pharmaceuticals, vaccinations, radiation, and weaponized warfare, the powers that be are working on new strain of stronger ‘humans’ to carry on our existence. Forget designer babies with specific gene preferences determined by parents, we’re talking about the utter transformation by a technocracy of the human genome. It is called transhumanism and scientists in the UK and US have already submitted proposals to legally create GMO babies. Actually, GMO human embryos have already been created.

Techno-eugenics, you might call it – a way to appropriate humanity for the use of an elite class. It seems innocuous at first – using stem cells to help women with fertility issues get pregnant or to help develop a healthy fetus in a woman who has damaged DNA, but it isn’t something to be taken lightly, or without deep moral concern.

The same energy that created the atom bomb could have been used for less malevolent purposes, and this is no different. Sure, a bionic arm for a Vietnam vet who has lost his due to an IED explosion is a good thing  – but ‘improving’ upon the human form until we look more like Iron Man than a human being? What is the good in that? For some, it is considered our destiny.

To understand transhumanism, you have to understand the philosophical leanings of some of its earliest members. Julian Huxley, brother of Aldous who authored Brave New World, first used this word: Transhumanism. Huxley was a member of the British Eugenics Society, eugenics being the touchstone of this movement.

Members of the FDA say they are worried that not enough testing had been done on animals or in vivo to start creating GMO babies, and Dr. Evan Snyder of the Sanford-Burnham Medical Research Institute in La Jolla, Calif., who chairs the 25-member committee which will determine if this is the right direction for humanity to go in, said:

“I think there was a sense of the committee that at this particular point in time, there was probably not enough data either in animals or in vitro to conclusively move on to human trials … without answering a few additional questions.”

A few additional questions? How about a slew of them, like:

1. Who will determine which genes are to be vetted out and disposed of and which genes will be kept? Who is to prevent this from becoming a highly technologically advanced version of Stalinism or Nazism?

2. Will some races be considered inferior to others, and will designer babies only be available to certain groups of people? We already know that the elite class wants to perpetuate their own bloodlines, and weed out the ‘disposable’ class, as Bill Gates has been known to call us.

“The world today has 6.8 billion people… that’s headed up to about 9 billion. Now if we do a really great job on new vaccines, health care, reproductive health services, we could lower that by perhaps 10 or 15 percent.” ~ Bill Gates

3. Will people be conditioned to accept their ‘enhanced’ state like we are being asked to accept drones and other ‘bionic’ warfare? What happens if we don’t want to be ‘enhanced’ or modified at all?

4. If government agencies and corporations create our new DNA, who has ownership to our bodies? It is already well known that DNA banks exist wherein corporations have been allowed to patent specific genes – including those which cause disease – so that they can ‘offer’ the ‘cure’ for reducing the diseases they cause. In a 105-page decision, two federal judges have allowed corporations to own genes again.

5. Is the act of creating humans morally acceptable in any way, shape, or form?

Companies like Myriad Genetics are already fighting over ownership of that which is ‘natural’ and that which is genetically modified or man-made DNA:

“According to Myriad, isolated DNA does not exist in nature, and isolated DNAs, unlike native DNAs, can be used as primers and probes for diagnosing cancer.”

At TechDirt.com, Mike Masnick made the colorful analogy that this is like “arguing that because a severed finger is not attached to a hand, the finger is not naturally occurring, and, thus, is patentable.”

If you want Big Pharma and Biotech companies to be able to own every square inch of you – right down to your DNA – then this is a great advance in technology and medicine. The babies you make will not be your own, and the DNA in your own body will be patented by some corporation that has the same rights as a person. This isn’t a Brave New World, it’s a completely insane one.

8 responses to “Biotech is Creating GMO Human Babies: What Could Possibly go Wrong?”