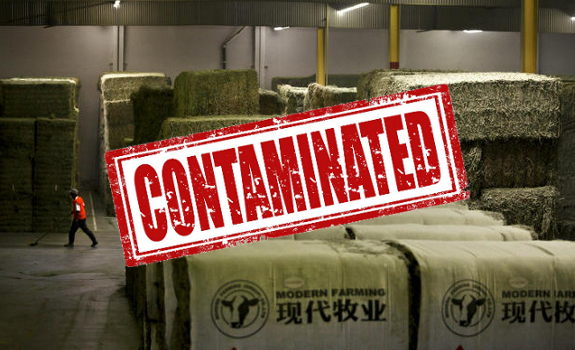 The Chinese used to be quite confident that their hay was GMO free, but all that is about to change. Hay exported to the country from the U.S. is currently in quarantine due to the detection of GMO traits, specifically of genetically modified alfalfa, according to a USDA spokesperson.

This isn’t a singular occurrence, either. Last year, a Washington State grower’s hay was rejected after it tested positive for GMO alfalfa. This doesn’t sit well with China, since all imported hay is supposed to be GMO-free. If the trend continues, they could boycott all US grown hay completely. They aren’t willing to feed their livestock hay grown with Round Up Ready traits – yet for some reason, many US farmers still are.

Chinese officials are already preparing to implement more stringent testing thresholds to keep the GM alfalfa out of their imports.

A USDA representative, who declined to be identified, said:

“We understand that China has recently increased the frequency of its GE (genetically engineered) testing and has a zero tolerance for unapproved biotech traits.”

According to the spokesperson, the USDA has been working with authorities and the U.S. alfalfa industry to find out why ‘certified’ alfalfa has GM traits and to come to an agreement.

However, many industry officials are frustrated by the lack of information and the slow progress related to changing GMO testing sensitivity in hay, says Harry Kreeft, plant pathologist and nematologist with Western Laboratories in Parma, ID who conducts GMO and other testing for the Ag industry:

The current threshold of acceptance is 5% GMO by Chinese importers, but this could be tightened to 0.2%, and growers would be hard pressed to meet these standards with unintended cross-pollination along with the shady practices of GM companies who often grow ‘test’ fields of GM crops without regulatory approval.

The Chinese need hay, but they may look to other sources if they can’t rely on the U.S. to provide exports that are GM-free. After all, we know China isn’t afraid to reject GMOs from the U.S. or even burn shipment of GMO crops – the country has done it on multiple occasions.