An excuse for weather modification programs?

Dr. Matthew Watson from Bristol University in the UK told the media recently that he’s “terrified” by many of the geoengineering projects started to thwart man-made climate change, a phenomenon being hawked as an excuse for weather modification programs by many in mainstream science as a ‘threat to humanity.’

“. . . terrified, because the potential for misstep is considerable.”

He worked on a $2.8 million weather manipulation project of the exact type that he says he is so afraid of. The project will inject sulfur particles into the Earth’s atmosphere with the stated goal of blocking the sun’s rays from reaching Earth, ostensibly to keep the earth from getting too warm. The project is called SPICE, and Dr. Watson leads the study.

Watson has already faced setbacks, since one plan to release a huge balloon into the air to release the sulfur particles was scraped over patenting disputes. He says that millions have already been spent on research though scientists are ‘decades away’ from where they want to be, and no known studies on the possible dire ramifications of aerosol spraying have been released to the public. 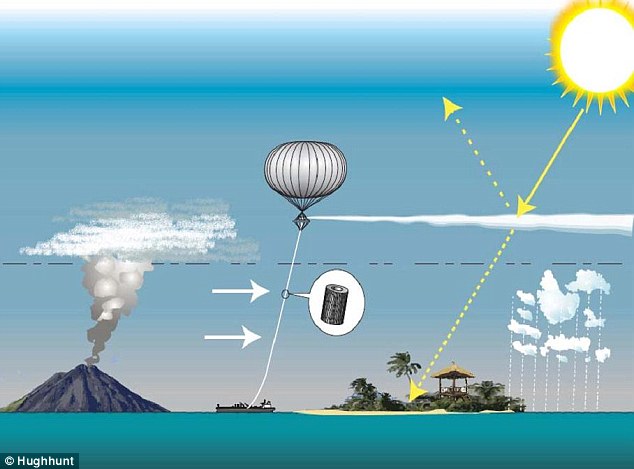 Dr Watson said the day may come when the use of such technologies cannot be avoided.

“We are swimming, drowning, in a sea of ignorance. This terrifies me. But doing nothing is not an option. Unless we’re very wrong about climate change or quickly change our ways, at some point we’re going to have to ‘go outside’ [with these technologies],” he said.

Many are also wary of the reasons being touted as necessary for aerosol particles are being dumped into our airways.

“Stratospheric aerosol geoengineering is a primary term for the ongoing global climate modification programs being conducted by major powers around the world. “Aerosols” is simply a term for a microscopic particle that is suspended in the air. A primary stated goal of the geoengineering programs is to provide a “solar shield” to slow “runaway climate change”  by spraying tens of millions of tons of highly toxic metal nano particulates (a nanometer is 1/1,000,000,000 of a meter) into the atmosphere from jet aircraft.”

Aluminum, and other toxic particles are showing up in rain tests around the world. Snow tests conducted in Mt Shasta, California were especially alarming.

I urge you to do more of your own research into this matter. If a geo-engineering scientists is ringing alarm bells, it is certainly time to listen.