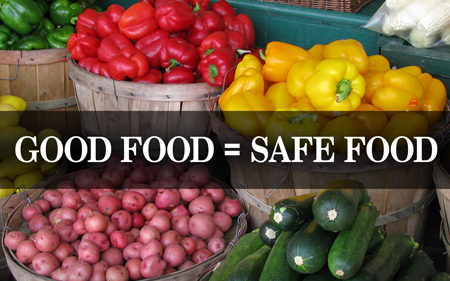 It’s time to take action against the Food and Drug Administration (FDA) who has become so inanely vacuous that it will take some serious activist action to wake them up from their lobbyist-induced comas. In a white paper released by the Cornucopia Institute, the relatively new rules of the FDA’s Food Safety Modernization Act are drawn into question. According to their expert opinion, and to what has seemed obvious to many of us for years, our food safety is in serious jeopardy.

In this critical analysis of the FDA’s rules swept into action with the President’s signature in 2011. According to the paper:

“The proposed Rule is grossly misdirected and a potential disaster for responsible, family-scale farmers and their loyal customers. At the same time, the root causation (including industrialized livestock production) of much of the contaminated food that appears in our supply remains unaddressed as the FDAs oversight does not extend to those types of operations.

The FDA badly misfires several points, saddling farmers with management of risk factors beyond their control while missing opportunities to address systematic food safety problems. The food safety proposal misallocates economic burdens on both private and public resources, while it underutilizes the FDA’s actual strength and capacities.”

There are further significant points, but it goes back to the obvious. As long as Big Pharma and Big Ag are running the show, the FDA is nothing more than a puppet institution passing into law, practices that continuously disenfranchise the small farm. It is on the small farm that non-GMO and organic growing practices take root and spread. Show me a single organic farm that can currently compete with the likes of Monsanto or Dow chemical.

There isn’t one, because these companies continue to aim at controlling the entire food supply. They seek to:

The FDA’s rules only support Big Ag in their convoluted reasoning, and further promote the bloated bottom lines of companies that are poisoning the planet. Judith McGeary, Executive Director of the Farm and Ranch Freedom Alliance and a member of the advisory panel for the Cornucopia Institute said, “. . .In practical terms, the FDA will be able to target small farms one-by-one and put them out of business, with little to no recourse for the farmers.”

This has got to stop. Sign the proxy letter here.