While the Food and Drug Administration has seemingly reached the limit for unbelievable behavior, the company’s decisions continue to astound and appall consumers and health activists alike. In the agency’s latest decision, undoubtedly amazing thousands of individuals yet again, the FDA virtually erased 1 million signatures and comments on the ‘Just Label It’ campaign calling for the labeling of genetically modified foods.

The ‘Just Label It” campaign has gotten more signatures than any campaign in history for the labeling of genetically modified foods. Since October of 2011, the campaign has received over 900,000 signatures, with 55 politicians joining in on the movement. So what’s the problem here?

Evidently, the FDA counts the amount of signatures not by how many people signed, but how many different individual letters are brought to it. To the FDA, even tens of thousands of signatures presented on a single petition are counted as – you guessed it – a single comment. This is how, despite over a million supporters being gathered by the petition, the FDA concluded a count of only 394.

“This is an election year and there are more than a million people who say this is important to them. This is petition has nothing to do with whether or genetically modified foods are dangerous. We don’t label dangerous foods, we take them off the shelves. This petition is about a the citizens’ right to know what they are eating and whether or not these foods represent a novel change.” said Andrew Kimbrell an attorney for the Center for Food Safety, one of the partner groups on the Just Label It campaign. 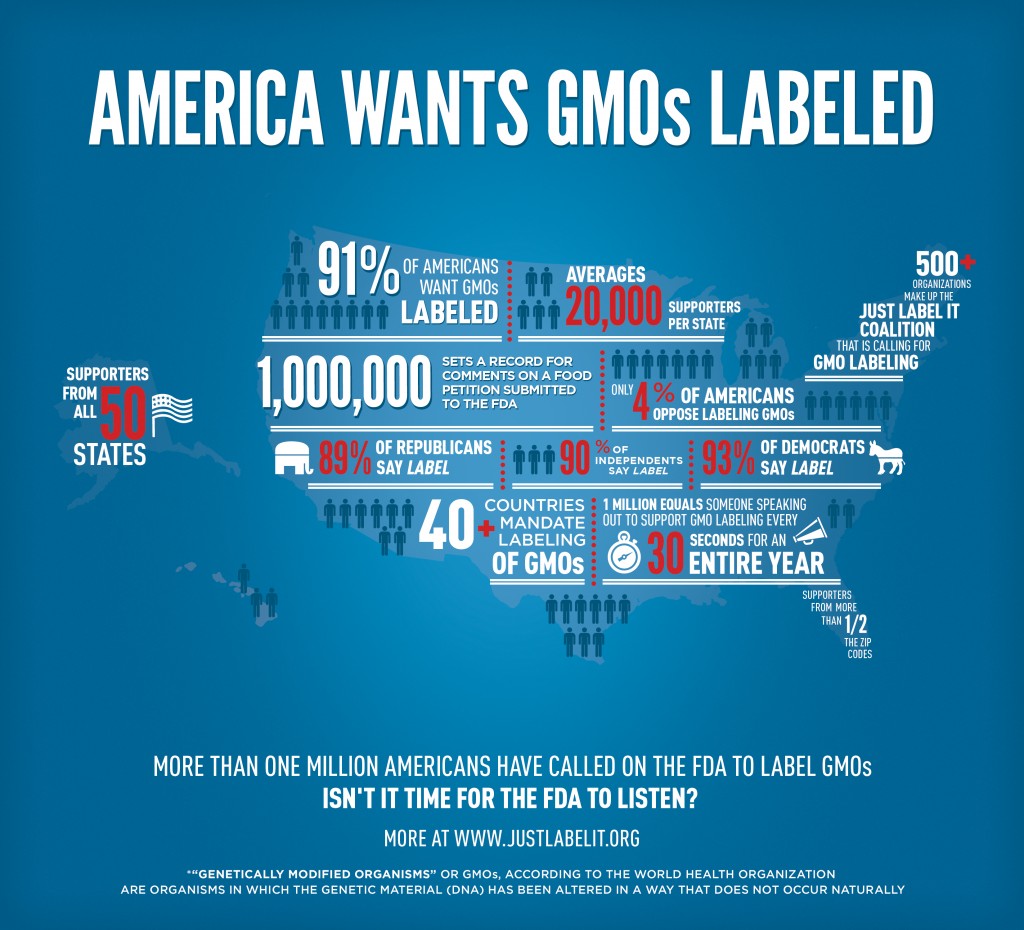 The argument as to whether genetically modified foods are dangerous is a whole discussion on its own, but for the FDA to completely sidestep away from the labeling of GM foods is completely and utterly irresponsible. Consumers have every right to know what they are consuming. Needless to say, biotechology giant Monsanto is against GMO labeling, claiming that it would mislead consumers since GMOs are ‘perfectly safe’. Of course there is plenty of evidence proving that GMOs are not completely safe, and how they affect life in the long-term is questionable to say the least. Either way, there is enough controversy surrounding the issue which is cause for alarm for millions of people, and Monsanto’s opinion on GMOs safety is a sorry excuse for not labeling foods as GM. Is the FDA avoiding such an issue because so many ties exist between genetically modified makers like Monsanto and the agency?

The bottom line is that you have the right to know what is in your food, and what your food IS. Denying that right, whether it be by the essential deletion of millions of signatures on a petition, or by ignoring the voices of thousands of people on the street, is taking power away from the people.