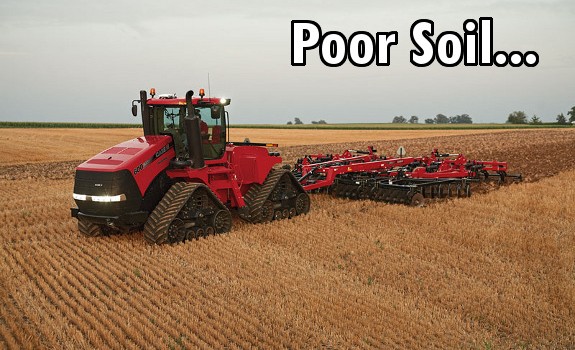 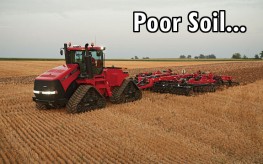 Farmers stopped utilizing deep tillage decades ago, but now because of biotech’s rampant superweeds (caused by the spraying of pesticides and glyphosate chemicals), they are being told to resort to the soil-damaging practice, once again.

Deep tillage was originally proposed as agricultural ‘progress.’ The practice used to get rid of weeds, but it poses other problems, including:

This is, in fact, a retrogressive step suggested by biotech because they have unleashed a beast on our fields that they don’t know how to control. Their answer is to just make more chemicals to spay over the fields that are already contaminated with millions of tons of glyphosate (RoundUp) chemicals.

It is clear that the lie of bio‘technology’ is affecting farms everywhere, and they have completely halted sustainable progress. Agricultural ‘experts’ are suggesting the deep tillage practice as a last-ditch resort. It won’t work and it will only cause more soil degradation. The only true answer will be to burn all GM crops and start immediate soil remediation.

Crop farmers in the Midwest are literally choking on superweeds spawned by glyphosate and other pesticides, and they are desperate for a solution. But any advice from biotech and Big Agribusiness is bad advice. Their top motivation is to sell more chemicals, not to ensure farmers have viable crops.

Due to their original ‘suggestion’ of GM, extreme controls are now needed to fight herbicide-resistant weeds in some areas. University of Missouri weed scientist Kevin Bradley said in a report to farmers that one particularly aggressive weed that can grow 1-2 inches a day is Palmer amaranth, and farmers are seeing it everywhere.

“Palmer amaranth is our No. 1 weed to watch in Missouri and the Midwest right now,” Bradley said.

The U.S. Department of Agriculture says 70 million acres of U.S. farmland had glyphosate resistant weeds in 2013.

Palmer amaranth is also “exploding” across Kansas this year, according to Dallas Peterson, a weed specialist with Kansas State University:

“We have had numerous calls about poor control of Palmer amaranth with glyphosate this year,” he said.

You can bet that the next chemical poison marketed by biotech will be something that targets the Palmer amaranth weed specifically – but then what super weeds will come next? Do we stop the madness and desist from putting more toxic drivel on our crops to save our soil and halt the growth of even more superweeds? No – in this country, we let regulators go even further. A whole new type of pesticides and herbicides is about to be unleashed on the public. What will it take for this to stop?