Diseases Spread by Ticks and Other Insects Have More Than TRIPLED

How to protect yourself as much as possible

When you go outdoors this spring or summer, make sure you cover up and do what is necessary to repel insects. A report released last year by the U.S. Centers for Disease Control (CDC) shows that in the U.S., diseases spread by tick, flea, and mosquito bites more than tripled from 2004 to 2016. During that period, more than 640,000 cases of vector-borne diseases were reported. So, you should probably be careful this year, too. [1]

Dr. Lyle Petersen, the director of the Division of Vector-Borne Diseases in the National Center for Emerging and Zoonotic Infectious Diseases at the CDC, warned:

“People really do need to take this seriously.”

It was the first time the CDC has collectively examined the trends for diseases that are spread by insects. According to Petersen, the goal of the study was to gain a better understanding of growing burden of illnesses such as Zika, Lyme disease, and West Nile virus in the U.S.

The report, published in the CDC’s Morbidity and Mortality Weekly Report, shows that the number of reported cases of vector-borne diseases increased from 27,388 cases in 2004 to more than 96,000 cases in 2016. Experts say that number might actually be much higher, partly because many infections go unreported and unrecognized. [2]

The increase in vector-borne diseases can largely be attributed to ticks and mosquitoes, the authors state in the report, with ticks being responsible for 77% of all reports. In fact, diseases caused by tick bites doubled during the time period, with Lyme disease accounting for 82% of all tick-borne disease reports. Fleas can spread disease, too, including the plague, but those numbers are considerably lower.

From 2004 to 2016, there were 9 insect-spread diseases reported in the U.S. and U.S. territories, including Zika, chikungunya, Heartland virus, Bourbon virus, and others.

“The data show that we’re seeing a steady increase and spread of tick-borne diseases, and an accelerating trend of mosquito-borne diseases introduced from other parts of the world. We need to support state and local health agencies responsible for detecting and responding to these diseases and controlling the mosquitoes, ticks, and fleas that spread them.”

The Rise in Mosquito-Borne Illnesses 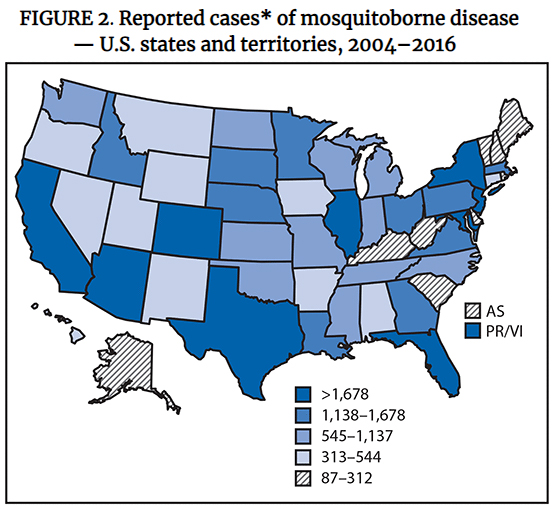 Humans haven’t suddenly become more tasty to mosquitoes. The increase in mosquito-borne diseases is largely due to the fact that people are traveling and accessing different parts of the world on a growing scale, and diseases “hitch a ride” with them back to the U.S.

“All someone needs to do is pick up one of these viruses and fly back to the United States. If a local mosquito bites them, it can cause an outbreak. That’s what happened with Zika.”

Outbreaks of other diseases like West Nile virus tend to be triggered by climate and weather, with warmer weather coinciding with outbreaks.

“The amount of virus in the mosquito increases, and when it bites you, more virus gets into you and the chances of you getting infected and becoming sick goes up.”

There are plants you can put in your garden to repel mosquitoes including citronella and marigolds, and homemade mosquito repellents can be equally effective.

Wearing long sleeves and pants can prevent mosquito bites, but that’s not always feasible when it’s 95 degrees outside. Other methods of preventing mosquito bites include using an air-conditioner whenever possible, and patching holes in window and door screens. [3]

To prevent mosquitoes from breeding, make sure there are no areas of stagnant, standing water near your home. 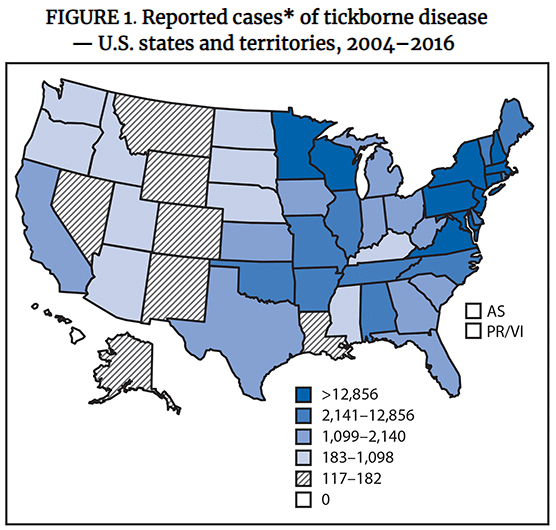 More people are living in wooded areas these days, which could help explain the increase in tick-borne illnesses. There are more deer in the woods, and deer are a popular host for ticks. However, as wooded and rural areas are replaced with suburban neighborhoods, tick bites are becoming increasingly common.

The changing climate is also said to play a role in the increase in tick-borne diseases and the spread of the insects’ geographic range, which has steadily grown in the past 20 years. [1] [2]

As temperatures have increased, ticks have been able to spread further north, putting more people at risk. Petersen said that “when the tick season is longer, people are exposed over longer periods.” [2]

“We desperately need to find new ways to deal with ticks and mosquitoes. We need better ways of controlling them and better diagnostic tools.” [1]

He added that the CDC is helping to provide funding for states to increase their ability to respond to emerging vector-borne diseases. Recently, the agency’s funding was increased to $8.3 billion for 2018.

There are commercial bug repellents on the market that can protect you from mosquitoes, ticks, and other biting insects as well – just know they are loaded with questionable chemicals.