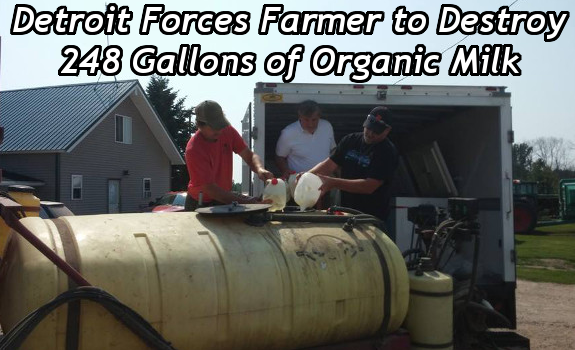 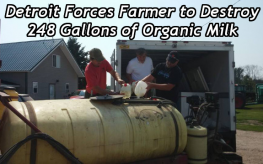 While Americans who can’t pay their bills in the bankrupt city of Detroit are having their water turned off, the state of Michigan decided to direct its minimal resources to crack-down on a few small food co-ops in the city of Standish for having the audacity to provide organic milk, free-range eggs, butter, cream, and other food to people who bought shares in their companies.

Hill High Dairy’s Facebook page stated that agents from the MDA stood over them to be certain they destroyed this foodstuff. Each individual egg had to be broken and the 248 gallons of milk had to be dumped in a sprayer that was then delivered to a nearby field – a complete waste. Since the original posting of this article on another site, the Hill High Dairy page is now inaccessible. You can still see pictures of the forced destruction, here, however.

The owners of the dairy also state that they were threatened with arrest for ‘selling food without a license,’ even though the farm is a co-op and people buy shares with the right to purchase directly from the farm. The MDA said that the co-op contracts were invalid, arguing that the food was not ‘shared,’ but ‘sold.’ It sounds more like the MDA stole food from people who had rightly paid for it, and have every legal reason to consume it.

“This is such a shame! I paid for these products and this is what happened!!!! They are all criminals!!! Government stealing all our food! I paid just so that Jenny and the farmers didn’t have to carry the burden all on their own!!!! A crying shame. Shame on Michigans Department of Agriculture! Criminals everyone on u!!!!” 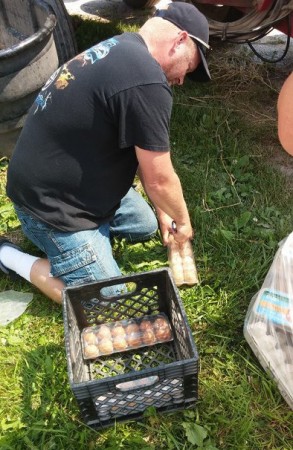 The MDA actually called these farms ‘dangerous’ even though none of the animals are drugged, tortured, or even caged, as much of the factory-farmed animals are kept. Real farming is now treated like a crime, and criminal Big Ag practices are upheld like the law. We live in a backwards world, folks. Big Corporations clearly don’t want people to have a right to eat organic, healthful food.