What are hospitals doing wrong?

Delirium, characterized by severe confusion due to rapid changes in brain function, is running rampant in those staying in hospitals. That such a serious clinical syndrome is now referred to as a “surprising side effect of hospital stays” is beyond incredible. Here the Hospital Industry has access to the most advanced diagnostic capability that money can buy, as well as the top expertise needed to interpret the appropriate tests, yet this is the message being put out by their media organs.

It really doesn’t take that much sleuthing to uncover the causal relationship between something as serious as delirium and its hospital-based cause. Therefore, it is quite likely that hospitals know exactly what the primary cause of delirium is but are determined not to release the information for fear of a barrage of meritorious lawsuits.

“When B. Paul Turpin was admitted to a Tennessee hospital in January, the biggest concern was whether the 69-year-old endocrinologist would survive. But as he battled a life-threatening infection, Turpin developed terrifying hallucinations, including one in which he was performing on a stage soaked with blood. Doctors tried to quell his delusions with increasingly large doses of sedatives, which only made him more disoriented.” [1] 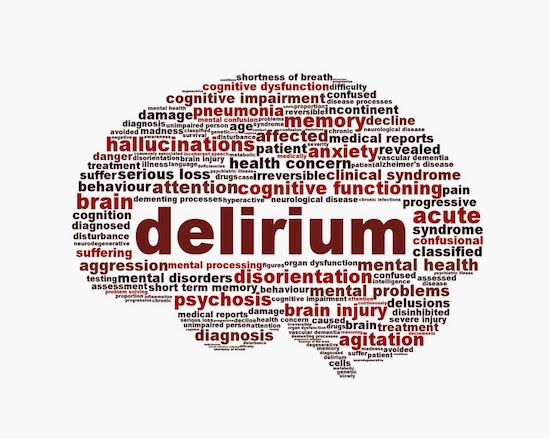 Delusions and hallucinations are only two of the more serious psychiatric symptoms which are commonly associated with delirium. It’s not very common for anyone to experience such frightening episodes of delirium unless they’re on certain types of powerful medications, and yet hospitals are at a loss for identifying its causation. Can such a state of affairs predominate except by willful blindness to or deliberate neglect of the real causes of hospital-acquired delirium?

“Turpin’s experience illustrates the consequences of delirium, a sudden disruption of consciousness and cognition marked by vivid hallucinations, delusions and an inability to focus that affects 7 million hospitalized Americans annually.” [1]

The source article of the 2 preceding quotes goes on to state the obvious about the most likely explanations for delirium being so common in hospital settings. “Patients treated in intensive care units who are heavily sedated and on ventilators are particularly likely to become delirious; some studies place the rate as high as 85 percent.”

Whenever the percentage of occurrence is as high as 85% for the incidence of a serious medical condition, the principal cause ought to be fairly self-evident … so self-evident that their discovery should be right around the corner either in the hospital pharmacy or in the ventilator.

Again, the article states that the folks in ICUs who are heavily sedated and/or on ventilators fall victim to delirium most frequently. Hence, any serious sleuthing should take a close look at the sedatives.

In general, sedatives come with all sorts of side effects. When consistently taken in high doses over a period of time, some sedatives can produce extremely adverse side effects. Therefore, prescribed pharmaceutical drugs such as sedatives would be a logical place to start for anyone filing a lawsuit.

The other common culprit in the development of iatrogenic illness in hospitals are ventilators. Ventilators require regular and thorough sanitizing and maintenance. If the cleaning and sanitizing process is neglected, a conducive environment can be created whereby bacteria and other pathogenic micro-organisms can proliferate.

The longer this unhealthy situation is allowed to persist, the greater the likelihood that patients will get sick; and in some cases, very sick.

This statement comes from the Wikipedia entry for “Delirium” and goes on to expose hospitals to an inordinate degree of scrutiny. The same entry goes on to assert that one of the two major causes of delirium comes from “drug effects, particularly anticholinergics or other CNS depressants (benzodiazepines and opioids).” [2]

Central nervous system depressants are exactly the type of sedatives often used in intensive care units. These depressants are well-known to have the following side effects when taken or administered in excess.

“Especially when taken in excess, CNS depressants can cause confusion and dizziness, and impair judgment, memory, intellectual performance, and motor coordination.” [2]

There may in fact be multiple cofactors involved in the etiology of hospital-based delirium. The diagram above illustrates some of those other factors which exist in every hospital setting. When considered in the aggregate, the only safe approach is to exert maximum control over those factors which are controllable such as the administration of powerful sedatives with well known adverse side effects.

Ventilators are also known to have their associated health problems, particularly when they’re not properly maintained. The hectic and often frenzied pace of hospitals often precludes the proper maintenance from being routinely performed, which can translate to serious medical consequences.

When 7 million Americans are annually affected by delirium during hospital stays something is very wrong, especially when no reasonable cause has been officially identified. Perhaps patients who suffer long term and debilitating side effects from such an incapacitating condition will proceed with the appropriate lawsuits.

In this way the legal process of discovery, as well as the subsequent medical investigations, will surely reveal the scientifically determined answers to this unacceptable predicament.

It appears that only when substantial punitive and/or compensatory damages are awarded by the courts will the offending hospital institutions be compelled to take all the necessary precautionary measures to prevent delirium. Clearly, the status quo concerning the inordinately high incidence of delirium in hospitals is intolerable by any standard and should be addressed post haste.

One response to “Delirium: Suffered By 7 Million Americans in Hospitals”