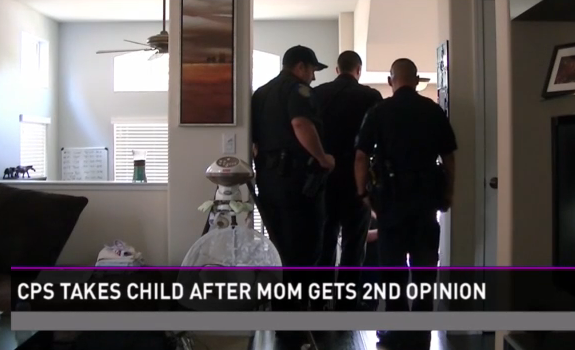 In California, seeking a second opinion for your child might just end up in a CPS home invasion. This what one couple experienced after attempting to bring their child to another medical doctor for a second opinion following failed and improper treatment of a potentially serious condition, all it takes is one angry healthcare provider in order to lose your child to a CPS home raid.

It all started when Anna Nikolayev and her husband Alex took a trip to Sutter Memorial Hospital over some flu-like symptoms that their 5-month-old son was experiencing. Intended to be a visit centered around ensuring the health of their child, who Anna says is the most important thing to her, they were met with resistance when questioning the treatment their young son was receiving. In fact, simply asking why their son was being given antibiotics, which absolutely destroys the small amounts of beneficial gut bacteria in children, was unacceptable.

Child Dosed Up With Antibiotics for ‘Flu-Like’ Symptoms 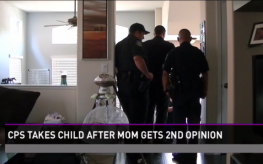 Anna recounts asking a nurse why exactly the antibiotics were being given to the 5-month-old, considering that antibiotics do nothing to combat the flu (as it is viral, not bacterial). In response to the reasonable question as to why the child was on routine antibiotics, the nurse at the hospital explained she did not ‘know’ why antibiotics were prescribed. Later on, Anna says that a doctor confirmed that the child absolutely should not have been on antibiotics.

So what did Anna do? What any reasonable person who cares about their child would do, get the heck out of the hospital prescribing 5-month-old children antibiotics for flu-like symptoms. Before this, the Sutter Hospital doctors actually went a step further. Beyond the antibiotic dosing, they actually admitted the couple’s son Sammy into the ICU and started discussing the possibility of heart surgery. Sammy has been receiving treatment for a heart murmur since birth.

To Anna, this was yet another step that was not explained and not making much sense. As a result, she pulled Sammy from the hospital and headed over to find a doctor at Kaiser Permanente who could offer a second opinion.

No Second Opinion For You

Ultimately, this turned out to be a move that would end with Sammy being taken away from the couple for what may be an extremely long time. And although their case will likely be shared thousands of times and potentially lead to the CPS being under such a great degree of public fire that they are forced to return Sammy to his parents,  we need to understand that not everyone will receive the same attention.

Instead, it must be seriously understood that the CPS went and took this child even after the medical doctor at Kaiser Permanente had stated: “I do not have concern for the safety of the child at home with his parents.”

Even police, after seeing that the child was safe, allowed the child to stay in the home — but that was before CPS came. So why would CPS take a child from a home where his safety is not in danger? As you hear in the video, CPS acts on orders from healthcare providers.

Providers like those from Sutter Memorial Hospital, who were improperly drugging up the child with antibiotics for no reason (at least not one they could provide) and discussing serious heart surgery. And despite what appears to be their utter malpractice, their rage that the parents left the hospital for a second opinion (and loss of serious profits) may have led to a CPS raid that you can see take place in the video above.

As Alex, the 5-month-old’s father, recounts:

“I was pushed against the building, smacked down. I said, ‘am I being placed under arrest?’ He smacked me down onto the ground, yelled out, ‘I think I got the keys to the house… It seems like parents have no right whatsoever.”

And he’s right, parents are increasingly losing their rights to treat their own child or even receive a second opinion from another medical doctor.