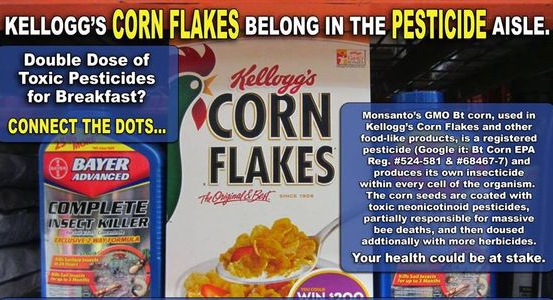 Most health-conscious people don’t usually resort to eating non-food, and instead concentrate on eating whole, organic foods that don’t come from inside a big food manufacturer’s fancy package. Going further, many consumers are standing up for their right to eat healthy, and are boycotting Kellogg’s. Want to know why? Read on.

Kellogg’s corn flakes and other food-like products that the company makes are full of Bt Corn. The EPA has registered Bt corn as a pesticide since the crop makes its own insecticide. (Reg. #524-581 and 68467-7) Bt corn has been shown to cause serious health problems.

The makers of Bt corn, primarily Monsanto and Syngenta, are responsible for selling this food-stuff to companies like Kellogg’s, but they have the choice to source their corn from organic farmers, and simply don’t.

Syngenta’s website says that Bt corn can ‘make a farmer’s life easier,’ but this has also been proven to be grossly false. Farmers in the Philippines who sowed Bt seeds went bankrupt.

“An estimated 270,000 small-hold farmers in the Philippines are being forced to grow GM corn and ending up in debt as a result.

These are the findings of a recent study by CI member IBON and MASIPAG, a farmer-led network of people’s organisations, non-government organisations and scientists.”

Indian farmers are committing suicide, too, specifically due to Bt seed.

“Globalization and monopoly have forced farmers to buy GM seeds and since GM crops have become pests’ resistance, the farmers have no choice but to purchase Monsanto’s pesticide. Sometimes GM crops fail over and over again; GM crops also do not grow back again next year and every year farmers have to buy new seeds. The Daily Mail  has called the continuous suicide of Indian farmers a “genocide” in human history. What’s really disturbing is that often time farmers commit suicide by drinking the insecticide shipped to them by Monsanto.”

So, to summarize, Kellogg’s company is using GMO Bt corn and other GMO crops in their food that they then sell the world to the tune of at least $12 billion annually, and in the process they are poisoning people and bankrupting farmers. What’s more, Kellogg’s foods are full of GMO sugarbeets – another reason consumers are joining the boycott. Is it really worth that morning bowl of cereal?