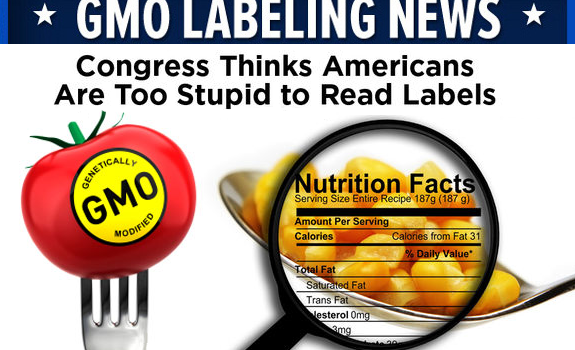 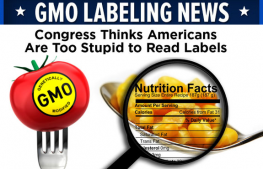 (NaturalSociety) Now here’s a pot calling a kettle black. Congress members declared outright and out loud that they believe Americans are too stupid to read GMO labels were they to be mandatory. This was an important ‘conclusion’ made at the close of a meeting of the House Agriculture Committee this past week.

It wasn’t just a few folks who think Americans aren’t bright enough to read a label. Members of the subcommittee on Horticulture, Research, Biotechnology, and Foreign Agriculture, as well as their four experts said that the efforts of biotech to supply GMO crops to the world were successful, and that American people over-react to food which has been called ‘unhealthy.’

If this doesn’t get you steaming mad enough to write some letters to your Congress members with some very fierce vocabulary words that few of them likely understand – like ‘carcinogenic proclivity’, or ‘plurality of diseases and environmental damage’, or try this one on for size, ‘unconstitutionality of poisoning masses of the proletariat’ – then I don’t know what will.

They even said that planting GMO has reduced the amount of pesticides used – completely ignoring that herbicide use is through the roof. Their genius technologies have completely backfired – but we are the stupid ones?

Apparently those who want GMO labeling are alarmists, fear-mongering halfwits, and people who thrive on greed and fear. Sounds to me like some of the largest pesticide and seed making companies in the world are guilty of this – not the people. The big six, are, in fact, destroying the entire natural world. This is not fear-mongering; this is the truth. It has been spelled out over and over again. Have these people been living with their heads in the sand as farmers commit suicide, superweeds spread everywhere, and the diseases of livestock fed GMO feed are multiplying?

“I really worry that labeling does more harm than good, that it leads too many people away from it and it diminishes the market for GMOs that are the solution to a lot of the problems we face,” said David Just, a professor at Cornell University and co-director of the Cornell Center for Behavioral Economics in Child Nutrition Programs. I wonder which Big six payroll this guy is on?

Rep. Ted Yoho (R-Fla.) when asked, “What is the biggest drawback? Is it the ignorance of what the product is, just from a lack of education?” said, “It is ignorance of the product, and it’s a general skepticism of anything they eat that is too processed or treated in some way that they don’t quite understand.”

Check out this video of the congressional panel.

Oh, we understand. Many of us are scientists ourselves, or we are farmers that have observed our own animals get sick and have deformed piglets. Or, we are mothers of children mental issues, or we are simply tired of being poisoned by a lying, thieving, capitalistic government.

“Even using long scientific-sounding words make it sound like it’s been grown in a test tube, and people get scared of it,” Just added. Again – the level of idiocy among our representatives is alarming.

Rep. Kurt Schrader (D-Ore.) said, “It’s obvious that while the science in the EU is incontrovertible about the health and safety benefits of genetically modified hybrid crops, that because of politics, people are afraid to lead, and inform consumers.”

Guess what Congress – you don’t get to decide what is best for us – we, the people, do. We want labeling, and we don’t care if you think we are a bunch of idiots. Perhaps you should look in the mirror, and dine on some big heaping helpings of GMO corn, soy, and bananas before you go telling us we’re all ignorant about GMOs.