JCAR015 uses genetically engineered cells as a treatment for cancer. However, one of the pursuits in oncology was temporarily halted by the FDA when some of the participants developed fatal swelling in the brain.

Hans Bishop, Juno’s chief executive, said in a conference call with securities analysts that the deaths were “difficult and humbling for everyone involved.”

As a result of the announcement, Juno stock fell 27% in after-hours trading. 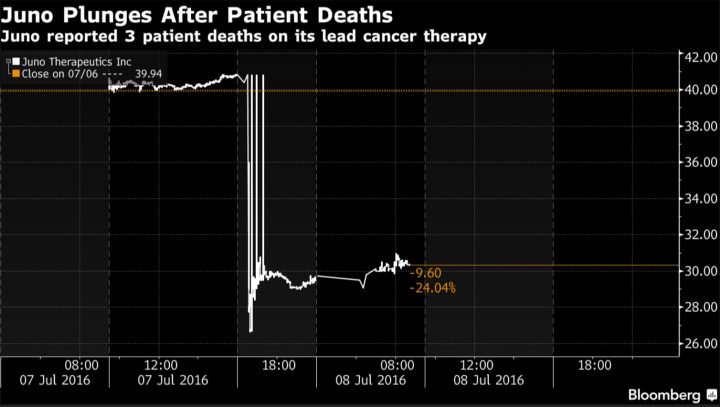 Bishop and other Juno executives believe the catastrophic side effects were the result of the combination of the chemotherapy drug and the particular cells being used.

Juno has asked to continue the trial without the drug, but it’s not clear whether the FDA will agree, or when it will make a decision. Company executives said it could be within 30 days.

Juno is working on CAR-T therapy, which entails drawing blood from a patient to extract immune cells, which are then genetically engineered to make them kill cancer cells. These immune cells are then placed back into the bloodstream to do their work.

Early studies have shown promising results in certain types of leukemia and lymphoma.

However, severe side effects can occur, especially immune system overreactions and neurological toxicity, including cerebral edema, which is swelling in the brain. Several deaths have been caused by these adverse events.

“Chemotherapy is used as part of the treatment to kill some of the patient’s immune system to make room for the genetically engineered cells that are put back into the body.”

However, the three patients who died during the trial had all been given both chemotherapy drugs. No such deaths occurred among the 13 or 14 patients who were given cyclophosphamide alone, Juno said.

In fact, among patients who received only cyclophosphamide, 80% of adults with acute lymphoblastic leukemia had at least temporary complete remissions. [1]

Acute lymphoblastic leukemia – the most common type of cancer in children – is an aggressive blood disease. Left untreated, the cancer spreads rapidly. In children, it is often cured. However, out of the 6,500 adults diagnosed with the disease each year, some 1,430 die from it. [2]

Juno executives said they would still use fludarabine, but in other trials using different genetically engineered cells. [1]

Additionally, CAR-T therapies eliminated all traces of leukemia and lymphoma in 40% to 90% of patients who had run out of other options. [3]

Earlier this year, six trials of Gilead Sciences’ cancer therapy drug Zydelig were halted after severe side effects, including multiple deaths, were reported.

Zydelig was being tested in combination with various other therapies in patients with newly diagnosed leukemia and lymphoma. Gilead eventually designated Zydelig for people who relapsed after previous treatment, and said it would stop its other programs using the drug as a first-line therapy. [4]