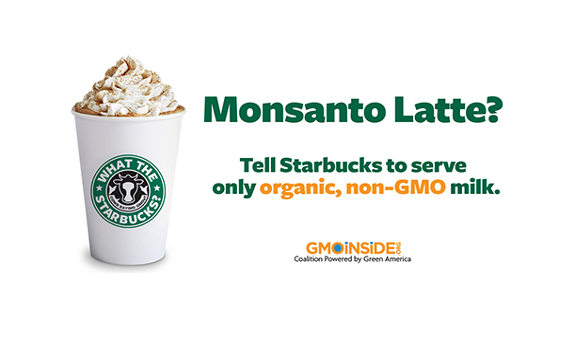 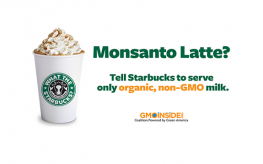 Consumer activists were responsible for the pressure doled out to sandwich giant Subway recently, pushing the food maker to announce they would no longer be using a “yoga mat” chemical in their breads. Similarly, Green America’s GMO Inside launched a similarly successful campaign against General Mills, pushing them to cease the inclusion of GMOs in Cheerios. Now, the same organization is hoping to get similar results from a company responsible for supplying millions of Americans with their much-needed caffeine fix—Starbucks.

According to Sustainable Pulse, the new campaign calls on Starbucks to stop sourcing their milk from cows fed GMO feeds like those found in corn, soy, alfalfa, and cottonseed. The effort also demands the coffee giant use a third-party verifier to confirm their milk  comes from GMO-free cows.

Consumers interested in joining the fight can sign the petition on GMOInside.com and get additional tips to help stack the pressure against Starbucks.

“Starbucks already serves soy milk that is organic and non-GMO. Consumers also deserve dairy milk held to the same standard and level of quality,” said campaign director Nicole McCann. ”Consumers will put pressure on Starbucks to serve only organic, non-GMO milk. And the reality is that the process Starbucks put in place to remove rBGH from its milk source can be used to source organic milk.”

With some 20,000 retail stores in 60 countries, getting Starbucks on board with GMO-free milk would be a major achievement and one that could motivate other big players to make similarly positive changes.

“Starbucks is already a leader in the coffee shop industry by serving rBGH-free dairy and using only USDA-certified organic soy milk,” reads the campaign’s official website. “By setting the same organic standard for dairy milk, Starbucks can demonstrate a serious commitment to providing environmentally and socially conscious products.”

“The days when a global company like Starbucks can hide GMOs from the customer are over. The age of transparency is here and I expect Starbucks will shortly realize it’s in its best interest to eliminate GMOs from its supply chain.”

The hope is that their latest campaign will be as successful as the one mounted against General Mills, which mobilized more than 50,000 people to post on Cheerio’s Facebook page and more than 35,000 consumers to call and write the company.