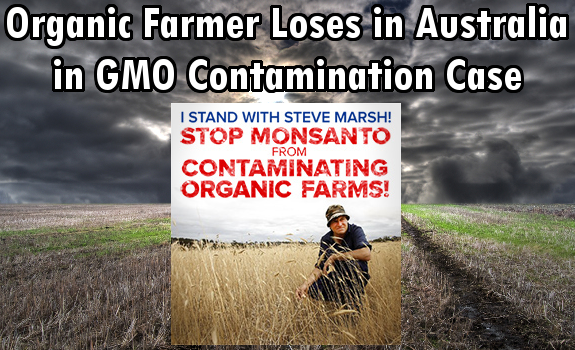 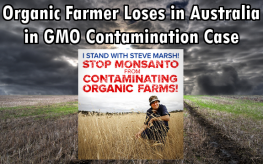 The attempt to separate genetically modified (GM) foods and non-GM foods is almost impossible, and with the vast majority of crops being genetically modified, how does an organic farmer really stand a chance? With the latest blow from the Australian Supreme Court, it is obvious that the biotech bullies are getting their way. An organic farmer, Steve Marsh will receive no compensation for losing his organic certification resulting from a neighbor’s GE crops contaminating his own.

A ruling of the Supreme Court of Western Australia had no sympathy for Steve Marsh’s plight. He’s an Australian farmer that sought compensation when his neighbor, Michael Baxter’s GE canola crops contaminated his organic wheat field. Baxter plants Monsanto’s Roundup Ready canola seeds. Though Marsh suffered economic damage due to his decertification partly due to Australia’s zero-tolerance organic standards, the courts had no sympathy for Marsh, but sided with biotech and his GE planting neighbor.

The entire world awaited the decision of this case, as it is precedence setting for others who wished to hold biotech accountable for ruining organic fields. Both litigants argued before the court earlier this year, and supporters were hoping for some legal protection from the uncontrolled invasion of GM seed on non-GM lands.

Opponents claimed that, were the suit to be decided in favor of Marsh, it would put undue burden on GE farmers and could restrict the number of GE crops planted. Exactly! We all held our breaths for the possible ruling, but it looks like even in a country with impeccable organic standards, Monsanto and their ilk have corrupted the thinking minds of high courts again.

This means, once again, that Monsanto gets away with polluting the environment, destroying organic farms, and ruining organic farmers without even a slap on the wrist. The court ruled that no physical harm had been shown and the burden rested on the plaintiff to clean up the GE-mess to reinstate his certification.

Read: Why Organic-GMO Coexistence is NOT an Option

Farmers who don’t purchase GE seeds and find them on their land face potential litigation from the seed producers for patent infringement.

Though Monsanto assurances to not pursue patent infringement cases where trace amounts of its GE crops or seed were discovered, the results failed to achieve any meaningful protections, and obviously they weren’t worried, since 79% of the land is already ‘polluted’ with GMOs.

Ironically, even in the GMO-smacked U.S., the U.S. Department of Agriculture (USDA) expects farmers to protect their own organic farms, with no currently allowable GE contamination thresholds.

This is Monsanto’s world, now. They bought it outright.