Air Pollution May be Dumbing People Down, Study Suggests

The issue is a particularly pressing one for seniors

A new study suggests that air pollution may come with more health consequences than previously thought. Specifically, prolonged exposure to dirty air may have a negative impact on cognitive abilities, especially in older men.

International Food Policy Research Institute (IFPRI) scientists looked at data from a large Chinese study that compared the cognitive test scores of almost 32,000 people over the age of 10 between 2010 and 2014 with their exposure to short- and long-term air pollution.

The team found that the more air pollution someone was exposed to, the lower their verbal and math scores fell. The decline in verbal scores was particularly pronounced in older men and people with less education. [1] [2]

People with less education were more likely to suffer cognitive decline because they tend to work outside more often and are exposed to higher levels of pollution. [2]

“The damage air pollution has on aging brains likely imposes substantial health and economic cost, considering that cognitive functioning is critical for the elderly to both running daily errands and making high-stakes economic decisions.”

Cognitive decline or impairment are potential risk factors for Alzheimer’s disease and other forms of dementia. An August 2017 study found that air pollution may be to blame for 20% of all dementia cases in the U.S.

Poor developing nations often grapple with extreme levels of air pollution. The study suggests these dirty environments may hamper economic growth in the parts of the world that need it most.

Nearly everyone on earth is exposed to pollution, with 1 out of 10 of the planet’s inhabitants breathing heavily polluted air, according to the World Health Organization (WHO). Africa and Asia are the most polluted regions of the world. 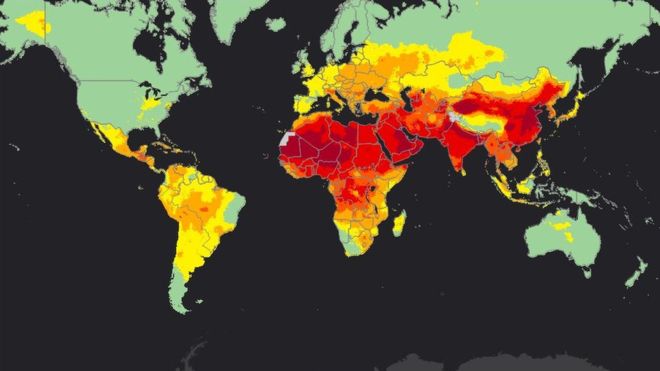 In China, air pollution is so severe that the country is expected to have more than 800,000 cases of lung cancer by 2020. Over the years, smog in China has sent thousands of people to emergency departments and businesses have had to shut down in order to keep workers and minimize their exposure to toxic air.

The top 20 most-polluted cities in the world all reside in developing countries, but that doesn’t mean that developed-country dwellers are safe from the toxins swirling around in the environment. A study in January 2018 found that 75% of deaths related to air pollution in India were in rural areas. [2]

Wealthy cities are at least fortunate enough to be able to afford creative solutions to the problem of air pollution. For example, in China, vertical forests are being planted to absorb carbon dioxide and convert it into oxygen. Sadly, this does little to help people living in the rural areas of the country, where residents are struck breathing noxious air.

The team isn’t sure how air pollution causes dementia, but they theorize that it may have a negative effect on the brain’s white matter, which “coordinates communication among brain regions.”

James Hendrix, the director of Global Science Initiatives at the Alzheimer’s Association, however, said that’s purely speculation. It’s difficult to tease out a causal link between air pollution and cognitive decline.

“I would say that it probably increases your risk – how much is difficult to say.”

There might not be much you can do about your exposure to pollution, but Hendrix noted that eating healthily, getting ample physical activity, and getting enough cognitive stimulation and social interaction reduces your risk of suffering from cognitive problems.

The study appears in the Proceedings of the National Academy of Sciences.