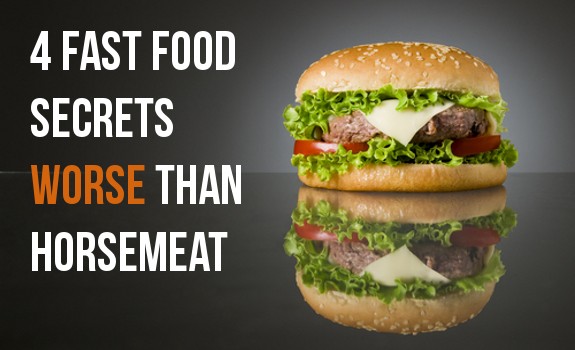 As you’re likely aware, Burger King UK recently admitted that its famous fast food symbol the Whopper (and its other burgers) were actually made using horsemeat. In an admission that came just hours after denying the presence of horse meat in the burgers, the secret ingredient has been broadcast on media stations worldwide as a breaking news piece. But what about the ingredients we know exist in many fast food creations and are actually far more concerning?

The fact that Burger King products contain horsemeat and the company denied the link to consumers before being forced to admit it due to DNA evidence reveals a few different things. First of all, it sheds even more light on how fast food eaters truly have no idea what they’re eating — a revelation that will be further revealed by exposing the known chemicals in these products. Secondly, it shows that Burger King either:

It is debatable which of these possible scenarios is worse, however they both are concerning. Especially when you know what Burger King is telling you about. And that leads to the third thing that the horsemeat revelation tells us: considering the highly toxic chemicals and other admitted ingredients inside fast food products, a lack of true ingredients listing may mean an even more disturbing list of additives. As for what we do know, however, here are 4 fast food ingredients that are way worse than horsemeat:

You may have fond memories of enjoying a Wendy’s Frosty, but the lengthy and gut-wrenching list of chemicals that create what is labeled as a ‘milkshake’ contain more than one bad surprise. Wendy’s Frosty contains the typical ensemble of fast food components such as traditionally-GMO corn syrup, artificial flavorings, and a list of thickening agents. Of the 14 ingredients it takes to create the fast food top seller, one chemical stands out. Contained in the Coffee Toffee Twisted Frosty, a laxative chemical and electronic cigarette filler known as propylene glycol is among the 25 new ingredients that make up this special Frosty.

Peer-reviewed research available on PubMed reveals that propylene glycol has been associated with neurotoxic effects in children and a reduction in the permeability of the blood brain barrier. Propylene glycol is also used ”as the killing and preserving agent in pitfall traps, usually used to capture ground beetles.” It just so happens to even be illegal in cat food.

If you were to use this yoga mat ingredient to produce food in another nation like Singapore, you would face fines up to $450,000 and 15 years in prison. In the United States, you can charge money and market the creation as the McRib. And that’s exactly what McDonald’s did. The McDonald’s McRib not only contains GMOs, deadly chemicals, and harmful fillers,  but an ingredient known as azodicarbonamide. Banned in Australia, Europe, and Singapore, azodicarbonamide is used in the creation of foamed plastics like yoga mats.

The troubling chemical is one of the 70 ingredients that compromise the ‘pork’ in the McRib sandwich.

It really seems like McDonald’s is attempting to utilize a long list of banned ingredients in order to create its world famous fast food cancer bombs. McDonald’s Chicken McNuggets have a reputation as one of the worst food items on the planet for a reason. The so-called ‘meat’ of the nugget is actually made up of 7 different ingredients — not chicken. These include sodium phosphate, safflower oil, wheat starch, dextrose, and a particularly dangerous substance known as autolyzed yeast extract. While not the silicone breast implant chemical, but it is very similar in nature to MSG.

McDonald’s chicken McNuggets are full of surprises for sure, also containing dimethylpolysiloxane. This is the chemical that is used in silicone breast implants and silly putty, or at least will be for a short while longer. Dimethylpolysiloxane is actually being phased out as a breast plant filler due to safety concerns by the industry. It is still used by McDonald’s, however — at least in the US. McNuggets in Britain do not contain some of the dangerous chemicals that are so easily permitted in the US.

Is choosing the salad at a fast food establishment really the healthier choice? If you follow the marketing campaigns of these corporations, you may believe so. The sad truth, however, is that virtually every item sold in a fast food restaurant is tainted in some way with harsh chemicals and additives. Take McDonald’s ‘healthy’ salads, for example. Not only does the ‘cilantro lime glaze’ and the ‘orange glaze’ used on many of these salads contain propylene glycol (the chemical discussed in #1 as the laxative and electronic cigarette filler), but a medley of others on this list as well.

Two chemicals, however, stand out with the salad. Disodium inosinate, and disodium guanylate both divulge the presence of MSG within the ‘healthy’ salad.

It may seem like old news to some, but the reality is that even ‘healthy’ fast food items are filled with toxic ingredients. Remember, it’s not about the food itself (salad, for example), but what it contains. Until we realize that lettuce may contain more than the eye can perceive, such as pesticides, herbicides, insecticides, preservatives, flavor enhancers, sweeteners, and more, it will be impossible to establish what ‘health’ really means.