10 Ways to Stop the Food Waste

Do you have any food-saving tips?

Monsanto, Bayer, Syngenta, and other biotech bullies are still telling the world they are trying to feed us with their GM foods, but I think most of us are on to their shady tactics. I will venture that in order to feed a growing population, one thing we need to start doing is STOP wasting so much food. 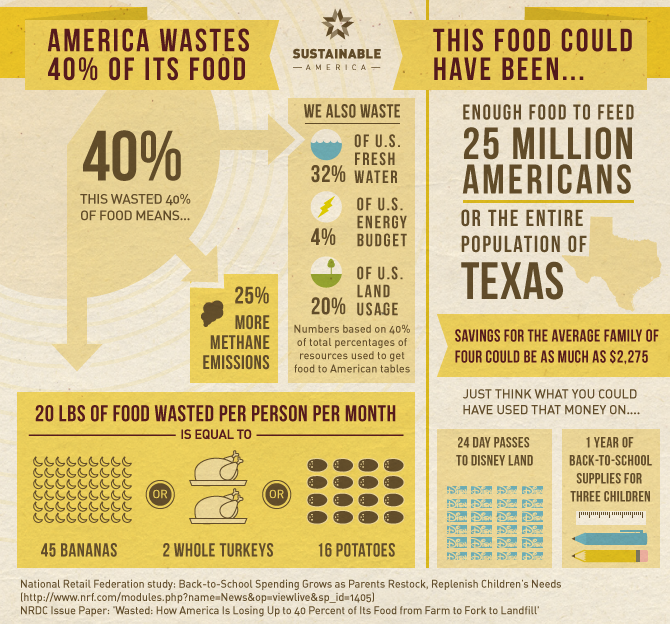 Americans Waste so Much Food!

In making food, we also waste 25% of our fresh water, and don’t get me started on all the plastic packaging we create to ship and store this food that is full of hormone-disrupting chemicals like bisphenol-a (BPA). When you realize that most Americans don’t think its their house causing the food waste problem, consider this:

An article from US News says that “Americans really are throwing money into the trash bins on the curb” with all the food we waste.

According to a report published by the National Resources Defense Council, the average American throws away about 25 percent of food and beverages purchased. For a family of four, the money wasted likely totals between $1,365 and $2,275.

This totals to an annual food waste in the US, according to Second Harvest, of over 41 billion pounds, or $43 billion dollars worth of food. Fifteen percent of that includes products that are within their expiration date but are never even opened. According USDA stats, 133 billion pounds of food went uneaten in 2010 alone.

And it doesn’t stop there. Yearly, America’s convenience stores, restaurants and supermarkets also throw out about 27 million tons of edible food worth $30 billion.

We should start thinking more about the hungry families that can’t even afford to buy a sack of rice in third world countries. Or the farmers in India that have gown bankrupt trying to grow GM crops. Or the homeless right here in America.

Read: 10 Ways to Reduce Food Waste and Save the Planet

10 Ways to Stop the Food Waste

The good news is that there is much we can do to change this consumer-driven, gluttonous behavior. Here are just 10 ways to stop the food waste:

8 responses to “10 Ways to Stop the Food Waste”