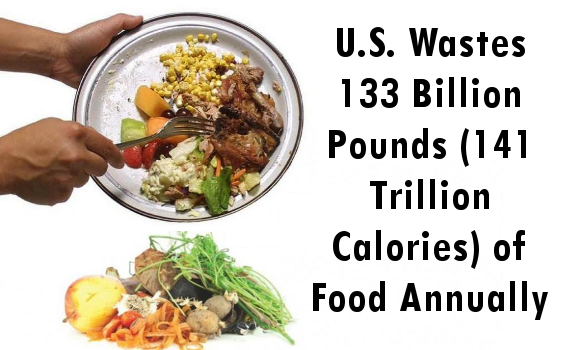 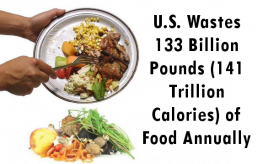 (NaturalSociety.com) Before you scrape the leftovers on your plate into the garbage, take heed: every single year the U.S. wastes some 141 trillion calories of food, the equivalent of 1,249 calories wasted per person per day. In this world, where 7.1 billion people are suffering from under-nourishment, we should really think twice before biting off more than we can chew.

The latest figures on food wasting come from the USDA, who says in 2010 Americans wasted some 133 billion pounds of food. In a 430 billion pound food supply, that’s about one-third of the whole wasted. Economically, it’s $161.6 billion in food wastage.

This wasted food isn’t only the stuff being scraped from your plate when you finish a meal, but the food at the back of your fridge that’s been allowed to go bad, food discarded by restaurants and retailers because of a blemish or expiration date, and the food you pack in your child’s lunch that never makes it into their mouth.

This wasted food has many effects, most obviously that it’s food that could be diverted elsewhere. The UN Food and Agriculture Organization estimates one in eight people around the world are suffering from hunger. Almost all of them live in “developing” countries, but some live right here in the U.S.

Wasted food also results in greenhouse gas emissions, as whether it is incinerated or decomposing in a landfill, it puts off these gases.

The costs of wasting food comes from several places—not just how much you paid for it before you allowed it to go to waste. The money used at all stages of production and the nonrenewable resources (water and fossil fuels) to grow it, package it, and transport it, all go down the drain when the food is wasted.

The “clean plate club” was established in 1917 by a government interested in reducing food waste during times of war. While the leftovers from this campaign may not have been good for Americans waistlines, it wasn’t totally misdirected.

Now, Americans load up on gastronomically impossible portion sizes and often purchase far more than they’ll be able to use. Simply being cognizant of our waste should provide enough motivation to cut back—both on our plates and the amount of food we bring into our homes and allow to go bad.

If you are interested in ways to reduce food waste, consider composting. Composting uses the foods that go bad and those you don’t eat to make a new nutrient-rich food for your garden.

One response to “U.S. Wastes 133 Billion Pounds, or 141 Trillion Calories, of Food Annually”