Here’s some news about cell phones and cancer which even the mainstream media has found impossible to ignore. The International Agency for Research on Cancer (IARC), an arm of the World Health Organization (WHO), has declared after a review of the research that cell phones are possible cancer-causing agents. The expert panel ruled that there was some evidence that cell phone use was linked to two types of tumors—brain tumors (gliomas) and acoustic neuromas.

Some scientists say the IARC classification is still not strong enough, and that cell phone radiation should have been classified as a “Probable Human Carcinogen” based on the existing science, but evidently there were not enough studies to classify it more strongly at this time.

Alasdair Philips of Powerwatch in the U.K. says,

“The existing science is very clear there is risk of cancer from cell phone use. The warning might have been 2A if there were a larger number of animal studies showing this, or if there were a larger number of up-to-date human studies. It’s important to recognize the Interphone study on which the classification to a large extent relied was completed in 2004, and current studies reflecting usage patterns today would be far more damning, possibly earning a Class 1 “Human Carcinogen.”

However, according to Electromagnetic Health:

“Nonetheless, the IARC opinion is a breath of fresh air to many, and restores some integrity to a badly tarnished IARC … The IARC classification of cell phones as a ‘possible human carcinogen’ will now travel throughout the world, influencing governments far and wide, for the 1st time providing an official scientific basis on which governments, schools and parents can legitimately call for precautionary behavior regarding these radiation-emitting devices.”

Professor Dariusz Leszczynski, of the Radiation and Nuclear Safety Authority in Finland, explains why this should probably be considered big news:

“… for the first time a very prominent evaluation report states it so openly and clearly: RF-EMF is possibly carcinogenic to humans. One has to remember that IARC monographs are considered as ‘gold standard’ in evaluation of carcinogenicity of physical and chemical agents. If IARC says it so clearly then there must be sufficient scientific reason for it, or IARC would not put its reputation behind such claim.”

So as you can see, while some journalists and scientists are now downplaying the IARC decision, saying the IARC classification of cell phones as possibly carcinogenic does not mean cell phones cause cancer, and even preposterously claiming that there is no evidence of this at all, there is no uncertainty that IARC, a highly respected scientific body, is now clearly saying there is evidence of carcinogenicity, otherwise they would not have classified in category 2B.

See Citizens for Health commentary on this, including comments on the 2B classification by 20+ year veteran of the IARC, Dr. Annie J. Sasco of Bordeaux Segalen University, France

“We expect to see continued spin from all directions, attempting to confuse the public and raise doubt, for some time to come. Thus it is especially important citizens be able to spot the misinformation and recognize there is an extraordinary propaganda machine in motion. We expect this will get LOUDER until industry is one day forced to cry ‘Uncle” under the expected landslide pressure lawsuits and from governments.”

Already, three senior members of Congress are calling on the General Accounting Office (GAO) to conduct a “thorough review” of the science and “adequacy” of current FCC exposure guidelines. These include Representatives Ed Markey (MA), Henry Waxman (CA) and Anna Eshoo (CA). And Reuters reports the Supreme Court is considering the fate of existing cell phone safety litigation in light of the WHO classification.

The IARC decision came only days after the Council of Europe, elders from 47 European countries, has called for a dramatic reduction in EMF exposure to humans from call phones and wireless technologies.

It is important to realize, however, that cell phones may not all be the same. Although all cell phones emit radiation, CDMA cell phones, such as those used by Sprint and Verizon, do not pulse their signals like the GSM phones used by AT&T and T-Mobile.

According to Dr. Joel Moskowitz, Director of the Center for Family and Community Health at the University of California, Berkeley, “GSM phones emit about 28 times more radiation on average compared to CDMA phones according to one published study.” Dr. Moskowitz recommends switching to a CDMA carrier if you want to reduce your radiation exposure.

“Pulsed radiation is much more harmful and the true intensity is not provided as it is “averaged” during a period of time (30 minutes for public exposure in US). The average of the pulse (maximum reading) and the minimum reading
gives a false low reading.  Engineers like to measure averages but living organisms react to extremes so these average readings under estimate the potential for harm if the radiation is pulsed.” 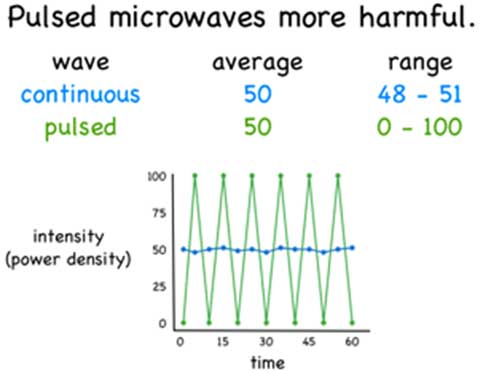