The “Perfect” Man According to Men – and Women

What do you think?

What really makes people attractive? Some people say its predetermined and you cant choose who you like. Some say facial symmetry, or pheromones subconsciously bring people together. Sometimes, somebody is just inexplicably pleasing to the eyes, almost like nature automatically decided it. Some people say attitude, personality, and individuality are what make a person the most appealing. Or maybe you need to be extremely muscular or fit?

In the modern world, there is not always a clear template of attractiveness, and masculinity or femininity can be subtly suggested or completely hijacked with the subtle programming of pop culture. Its human nature to compare oneself to those around them, but this can easily be unhealthy, and unrealistic in a society full of Photoshopping.

A recent study asked both UK men and women which features they thought were most attractive for males.  Results had men selecting a “pretty boy” looking configuration complete with a Justin Bieber hairstyle and a muscular physique. Interestingly, the women picked a more average type man, complete with no big muscles, some chest hair, and even a little flab. 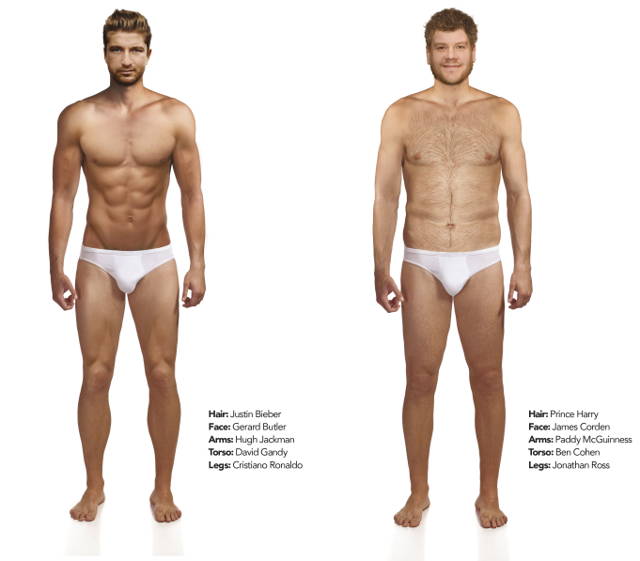 Left: What men think women want. | Right: What women want, according to the study.

The study suggests that men, at least in the UK have some sort of peripheral insecurity about their body image, and may feel the need to “measure up” to somebody famous, or even just someone ‘better looking’ than they are. Meanwhile, the women more or less don’t have superstar expectations for their ideal mate, and would be fine with a more or less normal-looking man.

Related: 6 Ways to Use Coconut Oil for Healthy Skin

During their lifetime, most men cultivate an idealized view of who they want to be based on their own personal heroes, their life experiences, and what the media portrays as cool. Sometimes this “idyllic man” can lose his innocence in the face of trendiness or the suggestive themes in pop music, movies, sports, or television. Sometimes we can take on more twisted reflection of themselves, one woefully out of touch with reality, as we try to be something we aren’t. (Needless to say, women face the same hardships.)

If you want to copy somebody’s style, or improve your body or self image, make sure you’re doing it for a good reason. Most people who are preoccupied with trying to appear cool can lack substance, and might appear like someone who can’t think for themselves.

People who set goals for themselves and actively try to push and improve themselves often find satisfaction in themselves independent of what somebody else tells them. These individuals protect the essence of their inner man, and reinforce their personal validity in the positive actions they take each day.

Why does it seem the women aren’t as preoccupied with the idealized view of a man as men are? The reality is that most women realize what they need in a mate is for a man to just be a that man. Somebody who retains their dignity, can think for themselves, who can forge their own destiny, and come up big when it counts.

Guys, gals – what do you think of this? Share your thoughts below.

39 responses to “The “Perfect” Man According to Men – and Women”