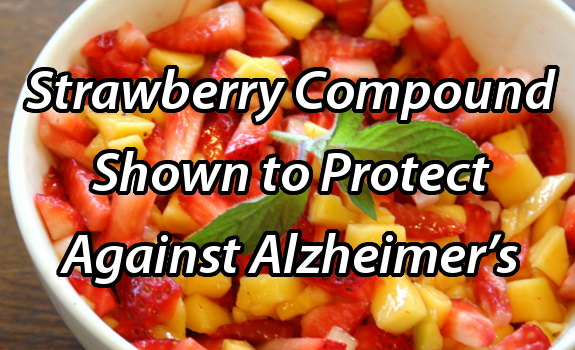 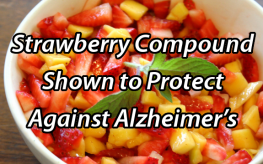 The thought of losing your mind is a frightening one, but one in three Americans die with Alzheimer’s or some other form of dementia. Regardless how frightening the possibility is, the chances of it happening to you aren’t exactly slim, which means prevention should be at the forefront of your mind. A recent study from the Salk Institute for Biological Studies indicates prevention could be as simple as a natural foods diet—rich in fruits (such as strawberries) and vegetables containing something called fisetin.

Fisetin is a flavonol found in strawberries, mangoes, cucumbers, and other vegetables and fruits. Researchers with the Salk Institute found this simple compound can actually reduce the risk of Alzheimer’s in mice, and could be effective in humans as well.

“We had already shown that in normal animals, fisetin can improve memory,” says study lead Pamela Maher, a senior staff scientist in Salk’s Cellular Neurobiology Laboratory. “What we showed here is that it also can have an effect on animals prone to Alzheimer’s.”

Maher and her team have documented that fisetin has both anti-inflammatory and antioxidant properties in the brain. It is also able to turn on a cellular pathway related to memory function.

The team looked to a type of mouse with mutated genes making them vulnerable to Alzheimer’s. At three months old, the researchers began feeding the mice a diet enriched with fisetin. Through memory and maze testing, they analyzed the fisetin group against a control.

“Even as the disease would have been progressing, the fisetin was able to continue preventing symptoms,” said Maher.

“Fisetin didn’t affect the plaques,” says Maher. “It seems to act on other pathways that haven’t been seriously investigated in the past as therapeutic targets.”

In other words, the study offered a look outside the tunnel vision that has largely been Alzheimer’s research.

While Maher says the next step is in applying their findings to Alzheimer’s treatments, the findings offer a good starting point for people looking at Alzheimer’s prevention.

“The model that we used here was a preventive model,” explains Maher. “We started the mice on the drugs before they had any memory loss. But obviously human patients don’t go to the doctor until they are already having memory problems.”