Safety and wholesomeness depend on the manufacturing process

Determined to be up to 150 times sweeter than sugar, stevia has been touted for many years as a natural substitute for white refined sugar as well as the various artificial sweeteners.

Stevia has the added benefits of being pH-stable, heat-stable, and non-fermentable. The two primary active compounds — stevioside and rebaudioside — are known as steviol glycosides.

Originally used by South American tribes for hundreds of years, it has been used to sweeten teas and medicines alike. Because of its extraordinary sweetness, it is also used in a variety of other prepared foods especially baked goods. The leaves of the Stevia rebaudiana plant have been recognized as a multi-purposeful herb in both Brazil and Paraguay where it is used as a “sweet treat.”

This is where the story of highly processed and unnatural stevia begins. The beverage companies created a huge public relations nightmare for themselves with the introduction of artificial sweeteners back in the 1960s and ’70s. Sugar substitutes like cyclamate and aspartame were added to some of the beverage recipes just at the same time that Saccharin was becoming popular.

Later on, sucralose (also known as Splenda), a non-nutritive and non-caloric sweetener, was added to the list because of the problems with those earlier products. All of these artificial sweeteners have now been proven to have their downside health risks, in addition to not tasting good.

In their eagerness to jump on the stevia bandwagon, the big beverage companies like Coca Cola and Pepsi have done what they usually do. They have formulated processes for extracting the sweetest ingredients from the stevia plant leaf. This process of chemical extraction renders the original form of the stevia herb virtually unrecognizable.

Virtually every manufacturing process that isolates specific chemical compounds does so in a manner that it can no longer be considered “natural.”

The extraction process involves myriad steps, and the Coca Cola company owns a patent to make its version of stevia.” [1]

The various beverage and food companies now market their new and improved stevia-sweetened products under various brand names. In each of these cases it is important to understand that the extracts and derivatives are far from natural. Because they are extracted or derived chemically, there may be present other chemical byproducts and/or residues which may be harmful.

Tests have not yet been conducted to determine exactly what the detrimental effects might be with the long-term use of these highly processed isolates. 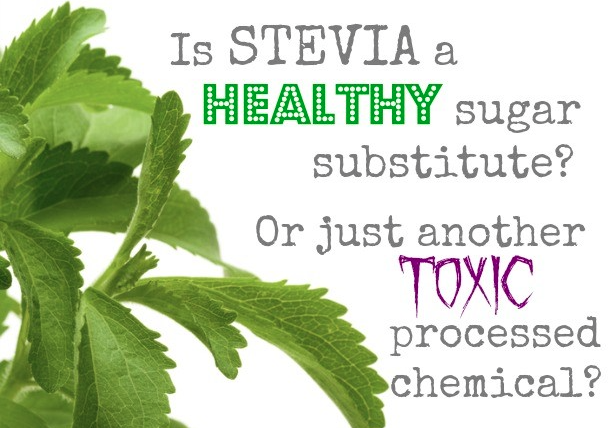 The trade and brand names of these chemically-derived forms of stevia, which are now used extensively across many food and beverage product lines, are as follows:

•  Truvia: the consumer brand for Rebiana marketed by Cargill and developed jointly with The Coca-Cola Company.

•  PureVia: PepsiCo’s brand of rebaudioside, a sweetener that was developed jointly with Whole Earth Sweetener Company.

•  Erylite Stevia: trade name for Jungbunzlauer’s sweetener with rebaudioside A.”[2]

Whereas the natural herb stevia can be safely used as a healthy sugar substitute, the processed forms ought to be avoided until the necessary research studies are completed. Herbal stevia has been utilized by diabetics and others with Metabolic syndrome to wean themselves off of all sorts of other sweeteners, both natural and synthetic. Because real stevia is so sweet, when using the real thing it does not require much to get one’s daily sweet fix.

Natural herbal stevia also has a touch of bitterness to it. This quality helps balance the body in subtle ways according to Ayurveda, especially due to the relative lack of the bitter taste in the all-American diet.

Like all processed food products everything depends on the source of the raw ingredients and the manufacturing process. Where it concerns the heavily marketed New Age products advertising “Stevia-sweetened”, you can’t be too careful. At this point you almost have to assume that the processed stevia is no longer natural and probably contains unhealthy micro-ingredients.

Therefore, the longer one ingests these products, the greater the likelihood that adverse side effects will occur. The key point here is that some of those unwanted effects can often occur for years below the level of perception. In other cases the manifesting symptoms are directly connected to what is essentially “rebaudioside”, not stevia, intake.