Could this be the answer to self-sustainability?

Imagine raising a vegetable garden right in front of your local police station, and not a single officer inquires about what you are doing. Or, plucking a few cherries from outside your doctors’ office before you go in for an annual check-up. How about harvesting some apples and pears from along a canal path? There are over 70 community gardens scattered around Todmorden, West Yorkshire in the United Kingdom, and the residents there are encouraged to take fresh fruit and vegetables as they are inclined.

In the small Victorian town, they’ve decided that waiting on the state to take care of their hungry is not an option. Just outside the police station are three large raised flower beds, full of edible plants. There are kale, carrots, lettuces and spring onions – all free for the taking.

This is similar to another town in England that transformed its landscape into a giant food-producing garden able to feed everyone who lives there.

Outside a supermarket car park there are plentiful herbs like rosemary, fennel  and thyme that can be used for cooking delicious dishes, as well as beans and peas. Fruit trees abound throughout the town as well.

Todmorden wants to be the first town in the UK to be completely self-sufficient when it comes to food. They have a plan to get there by 2018. Mary Clear, a 56-year-old grandmother who co-founded Incredible Edible, says that it is an ambitious goal, but “if you don’t aim high, you might as well stay in bed, mightn’t you?’

When asked what happens if someone took all the apples, or cleaned out the sage in police station bed, she remarks, “nothing.” In Todmorden, they believe in people – that they are decent, and that they want to be part of a solution.

She describes the notion as a gentle revolution. The idea for the completely self-sustaining town came when she and co-founder Pam Warhurst, the former owner of the town’s Bear Cafe, began wondering what they could do about the state of the world. They gathered up a few people and started planting.

This has burgeoned into Incredible Edible – and it goes beyond just planting vegetables or fruit trees. They want to stimulate the local economy and educate people about non-GMO, organic and sustainable food, too.

Instead of blaming the government,  or ‘others’ in the world, they decided to get their hands dirty – quite literally.

Now, children pluck liquorice or fennel from flower beds on their way to school, but the idea of free food for the taking didn’t catch on so easily at first.

She started by lowering the wall to her front garden, and encouraging passers-by to walk on her property and help themselves to whatever vegetables looked good to them. She even placed signs at her gardens asking people to take whatever they wanted, but the idea didn’t catch on for six months.

She realizes that a few gardens aren’t going to feed a town of 15,000 residents, but her program has grown. The local police station even recruits volunteers for her when residents stop by to dig up potatoes, or they encourage people to grow their own food at home. 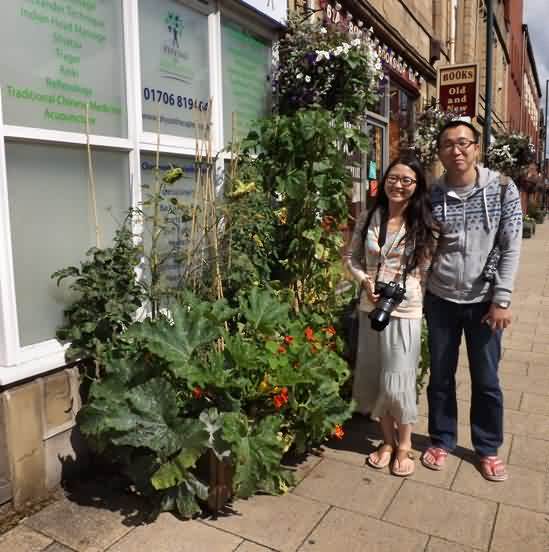 From learning to pickle vegetables and preserving fruits to building an organic-raised bed full of delicious produce, Incredible Edible is teaching its residents how to eat well and to be totally self-sustaining. They’ve been so successful at promoting the idea that a local school was recently granted £500,000 to set up a fish farm to help teach useful farming practices to young people.

While we can’t all live in Todmorden, we can certainly perpetuate this model of sustainable living, and turn our backs on Big Ag. Turning a normally vandalized vacant lot into an organic vegetable garden with fruit-bearing trees is a much better idea than growing acres of pesticide-laden fields, isn’t it?