Scientists Warn “Supercharged” GMOs Could be Used as Bio-weapons

Instructions for gene drives 'should be classified'

Scientists and environmentalists are concerned that a new technique for generated “supercharged” genetically modified organisms (GMOs) could be misused and trigger a health emergency or natural disaster.

The “gene drive” technology allows GMOs to spread rapidly in the wild. The fear is that these organisms could fall into the wrong hands or accidentally spark a catastrophe. The technology is being touted as a way to revolutionize medicine and agriculture, and supporters say it could, in theory, halt the spread of mosquito-borne diseases like malaria and yellow fever, and eliminate crop pests and invasive species like rats and can toads. [1]

But many scientists are warning that people with nefarious intentions or fumbling handlers could release the gene-drive technology from the lab and harm the environment and human health. It even has the potential to be used by terrorists as a bio-weapon directed against people or livestock because the genes – which are capable of spreading like a virus – will be cheap and easy to produce. [1]

“Just as gene drives can make mosquitoes unfit for hosting and spreading the malaria parasite, they could conceivably be designed with gene drives carrying cargo for delivering lethal bacterial toxins to humans,” said David Gurwitz, a geneticist at Tel Aviv University in Israel. [1] 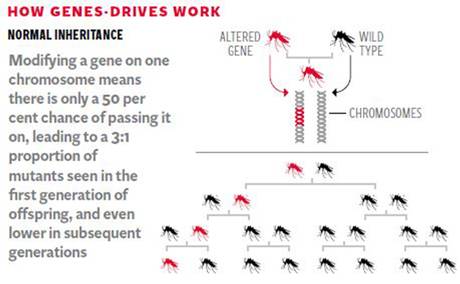 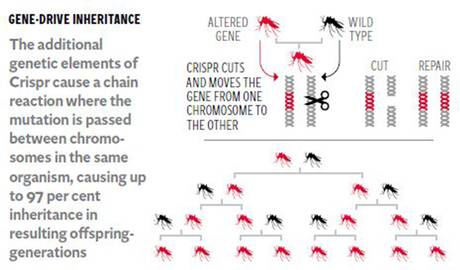 A group of senior geneticists are calling on the international community to safeguard researchers who want to generate drives by putting security measures in place at laboratories to prevent the genes from escaping accidentally and causing widespread GMO contamination. [1]

The U.S. National Academy of Sciences launched an extensive review last week of gene-drive technology in “non-human” organisms. This week, the journal Science will publish a group of 27 leading geneticists’ call on the scientific community to be open and transparent about the ‘risks and benefits’ of gene drives. The researchers have produced a minimum set of safety rules to guard against laboratory escapes.

Gene-drive technology is similar to a nuclear chain reaction in that it allows GM genes to be amplified within a breeding population of insects and other animals without any more intervention once the trait has been introduced, including a potentially dangerous one. Lab experiments on fruit flies have shown that a GM gene introduced to just one fly can “infect” nearly every other fly within the breeding population in just a few generations, which defies the normal rules of genetics.

Gene drives rely on a “cassette” of genetic elements that allow a GM gene to jump from one chromosome to another within the same individual with means that within a few generations, all of the sperm or eggs of the animal would carry that GM trait, rather than half. Eventually, none of the animal’s offspring would be free of the trait.

Gurwitz believes the specific instructions for creating gene drives should be classified, just like the technology for making nuclear weapons. At least 27 geneticists have objected to this notion, saying that openness and transparency is the best way to protect against the use of gene drives as a bio-weapon, and that classifying the information would prove to be ineffective and politically counterproductive. [1]