Warning: this video may gross you out

In light of the many negative effects of smoking and health issues revolving around cigarettes, various gruesome ad campaigns have been released in an attempt to sway people to quit smoking. Now, a series of gross videos of damaged, blackened lungs have recently been released as part of another anti-smoking campaign.

Zooming in on lungs which have been blackened by black mold-like spots, the footage was aired on Chinese television channel CCTV last Wednesday, warning long-term smokers and passive smokers of the dangers of tobacco smoke. The are meant to literally show the negative effects of smoking, from the inside-out.

The caption for the footage says:

“Over 80 per cent of lung cancer cases are believed to be caused by long-term smoking or ‘second hand smoke!’ In the images, the lung of someone who has smoked for 15 years is covered with large black spots, while the lung of a 30-year smoker is even more of a ghastly sight, where even the inside is covered with cancer causing substances.”

According to the World Health Organization: 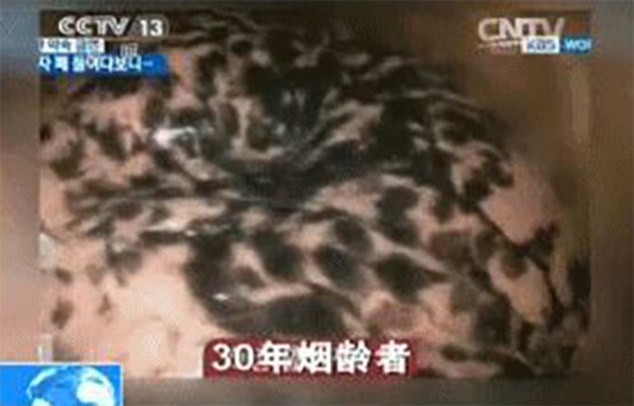 While many people may now know what smoking can do to the body, it is well known that nothing positive on a health level can come out the activity. Advertisers and Hollywood have successfully hammered the idea of smoking into our brains over the last few decades through placement in movies and TV shows, but people now know the truth concerning the negative health effects and child influence. Of course not all smokers want to quit, but for those who do, you may be surprised to find out what happens when you quit smoking.