Pesticide Chemical Blamed for the Deaths of 4 Children in Texas

Four children died and six others were injured after being accidentally poisoned by a chemical at a home in Amarillo, Texas. A noxious gas was apparently released when someone attempted to wash away or dilute a pesticide that had been applied under the home. [1]

The pesticide in question, called Weevilcide (aluminum phosphide), released phosphine gas when water was mixed with the poison pellets on January 2.

When crews responded to the home following a 5 a.m. call, they initially thought they were dealing with a case of carbon monoxide poisoning, according to Amarillo fire Capt. Larry Davis. [2]

One child died at the scene and the other three died at the hospital. All of the young victims – Yasmeen Balderas (17), Josue Balderas (11), Johnnie Balderas (9), and Felipe Balderas (7) – were residents of the home. [3]

Amarillo police said the family felt ill after the pellets were applied under their mobile home, so the kids’ father tried to dilute them with water by spraying them with a hose. It turned out to be a fatal mistake. Phosphine gas causes excess fluid in the lungs and respiratory failure. [1]

Aluminum phosphide is used to kill insects and burrowing rodents, especially in grain stores. However, it can be deadly to humans. The EPA lists the pesticide in “Toxicity Category I,” which is the most toxic category.

Weevilcide is only supposed to be sold to people with professional licenses or certifications. It is not available for sale to the general public. According to the product’s manual, two trained individuals are required to apply aluminum phosphide. The manual also lays out stringent guidelines for using the product. [2]

The father of the children told police that he received the pellets from a friend and personally spread them underneath the trailer. The father does not have a license or certification, and Davis said it was unclear whether the friend had one. 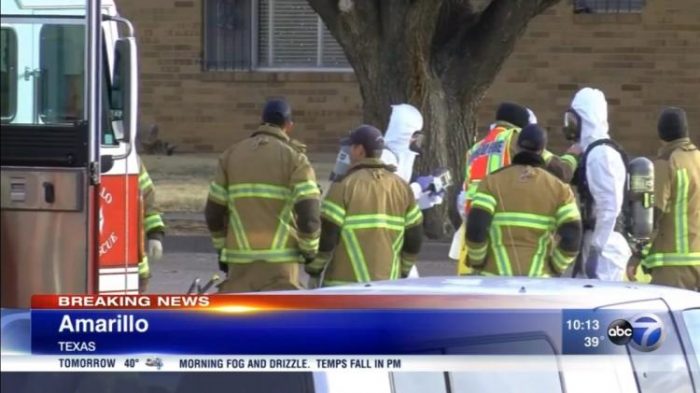 Due to its unlicensed use and the children’s deaths, a criminal investigation has been launched into the tragedy. Once completed, the investigation will be turned over to the district attorney to determine whether charges will be filed, according to Officer Jeb Hilton. Hilton said it’s possible that other federal and state environmental regulations agencies will investigate the use and storage of the aluminum phosphide.

As of January 3, the children’s mother, Martha Balderas, was in critical condition at University Medical Center in Lubbock, a hospital spokesman said. The father and four other children were being treated at BSA Health System in Amarillo and were in stable condition, hospital and fire officials said.

As a precaution, about 10 police, fire, and medical personnel who first responded to the home were taken to the hospital. Two individuals who had complained of nausea and a headache were kept overnight for observation but were in good condition January 3.

Fortunately, Davis said, the home was far enough away from other houses that no neighbors were affected by the poisonous gas.