Good News: Opioid Prescriptions Down for 1st Time in 20 Years

Though deaths from overdoses are still on the rise

In recent months, the federal government has been taking steps to try and tackle the burgeoning opioid crisis in the United States. Now, it seems, their efforts might be starting to pay off, as the number of opioid prescriptions have finally started falling for the first time since 1996, when OxyContin hit the market.

For the past 20 years, doctors have been prescribing these hardcore painkillers at an alarming rate – enough that every American adult could possess his or her own bottle. But a federal review shows that in 2013, 2014, and 2015, prescriptions for opioids declined.

In early March, the CDC released long-awaited guidelines for prescribing opioids to patients age 18 and older. The agency instructs doctors to turn to non-opioid medications first, such as anti-inflammatories, before prescribing an opioid. When it is necessary to prescribe the powerful drugs, they should be prescribed in combination with “nonpharmacologic or nonopioid pharmacologic therapy.”

Additionally, when opioids are used, the CDC recommends that doctors prescribe the lowest possible dose for the shortest possible duration.

Then, just weeks later, the FDA called on pharmaceutical companies to make opioid painkillers harder to abuse, and released draft guidelines for testing standards for the pills. Drug makers can make pills abuse-resistant by creating them to be harder to crush, dissolve, and snort.

Under the FDA’s guidelines, drug companies must conduct additional studies proving that generic versions of opioids, which had never been held to the same safety and efficacy standards as their brand-name counterparts, are, in fact, the same, and are made with the same anti-abuse properties as brand-name drugs. 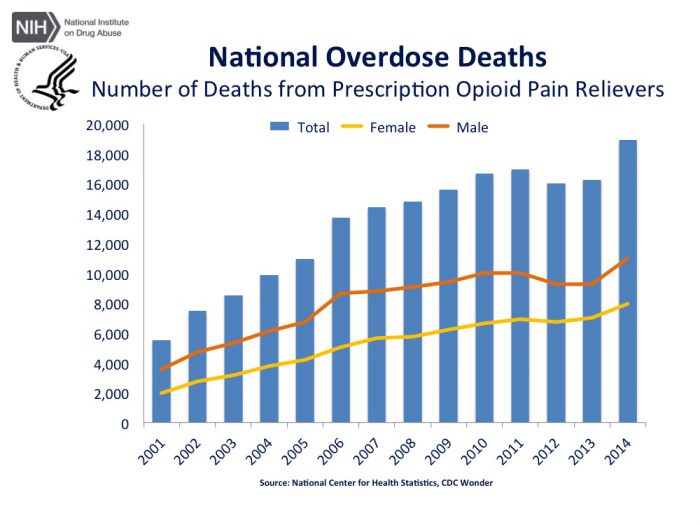 Greg Jones, an addiction specialist, says in an online training course he gives fellow doctors in his home state of Kentucky:

“We in the health-care profession had a lot of years to police ourselves and clean this up, and we didn’t do it. So the public got fed up with people dying from prescription-drug abuse and they got together and they passed some laws and put some rules in place.”

Experts believe fewer opioids are being prescribed because doctors are finally recognizing the grave danger associated with overprescribing and are heeding warnings about the addictive and sometimes deadly nature of drugs like OxyContin and Oxycodone.

Dr. Bruce Psaty, a researcher at the University of Washington who studies drug safety, told The New York Times:

“The culture is changing. We are on the downside of a curve with opioid prescribing now.”

According to IMS Health, an information firm whose data on prescribing is utilized throughout the health care industry, there has been a 12% national decline in opioid prescriptions since 2012. Symphony Health Solutions, another data company, reports that opioid prescriptions have dropped in 49 states since 2013. Encouragingly, West Virginia has seen the sharpest decline. The state is considered the epicenter of the opioid epidemic. Some of the biggest drops occurred in Texas and Oklahoma. Only South Dakota showed an increase.

In Jones’ home state of Kentucky, physicians have been given new tools to try and make sure their patients aren’t falling victim to drug abuse. A database of prescriptions for opioids and other federally controlled substances allows doctors to peek in on patients’ use of opioids and of combinations of potentially dangerous drugs, such as sedatives or muscle relaxants, to figure out whether they are at risk of addiction or overdose.

Physicians can also use the data to determine whether patients are “doctor shopping” – receiving painkillers and other controlled substances from several doctors at once. These patients are at high risk for addiction and overdose, and may be selling the pills illegally.

In 2012, Kentucky became the 1st state in the U.S. to require prescribers to look up patients’ prescription-drug histories via an electronic database called a prescription drug monitoring program (PDMP) before handing out a prescription for opioid painkillers, sedatives, and other addictive meds.

As of last month, with the inclusion of Maryland, 16 states had enacted similar laws. The CDC, the White House Office of National Drug Policy, and other health experts are urging other states to do the same. The American Medical Association (AMA) also supports state databases.

There are detractors, however, who argue that such databases are an invasion of patient privacy which could jeopardize patients’ need to ease their pain. And striking the right balance is going to be a challenge.

Dr. Nora Volkow, the director of the National Institute on Drug Abuse (NIDA), explained to the The Times:

“The urgency of the epidemic, it’s devastating consequences, demands interventions that in some instances may make it harder for some patients to get their medication. We need to set up a system to make sure they are covered. But we cannot continue the prescription practice of opioids the way we have been. We just can’t.”

In states that require doctors to use such monitoring systems, opioid prescriptions have plummeted. So, too, have drug-related hospitalizations and overdose deaths. Addiction treatment is becoming more commonplace in these states, as well, as more doctors refer patients to treatment after discovering they are doctor shopping.

An analysis by the University of Kentucky’s College of Pharmacy found that, since the requirement was enacted in Kentucky, overdose hospitalizations declined 26%, and prescription opioid deaths dropped 25% – the 1st reduction in nearly a decade, according to a March 2016 report by Shatterproof, a national advocacy organization that promotes prevention and treatment of drug addiction. [1]

Unfortunately, on a national level, fewer opioid prescriptions have not led to fewer deaths. People are overdosing on the drugs in increasing numbers. More than 28,000 individuals have fatally overdosed on opioids since 2014. That number includes deaths from both prescription painkillers and heroin, which is an illegal opioid.

Heroin addicts often start out as prescription opioid addicts. Now that opioid prescriptions are becoming harder to come by, and the pills themselves are harder to abuse, heroin addiction is on the rise.