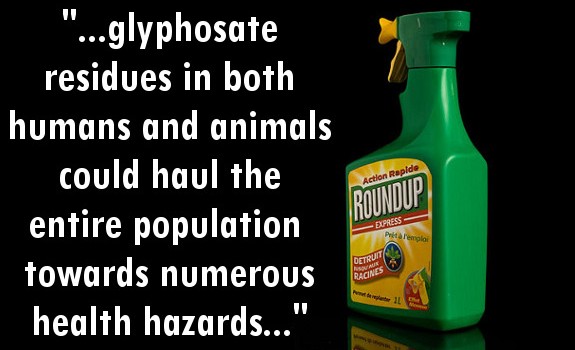 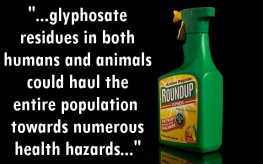 It has been revealed by numerous scientists that herbicides and pesticides bioaccumulate in the body – meaning the traces of chemicals we are exposed to in foods consumed daily end up adding up to larger loads of toxicity in the body long term.

One recent study published in the Journal of Environmental & Analytical Toxicology has now proven that animals and humans who consume GMO foods – those that are loaded with glyphosate chemicals, the main ingredient in Monsanto’s RoundUp – have extremely high levels of glyphosate in their urine. Conversely, people who eat primarily organic foods, and animals that are given feed from non-GMO plants, have lower levels of glyphosate in their urine.

While Monsanto and the biotech corporations would like us all to believe that GMO foods are the ‘same’ as non-GMO foods, the study also shows that people, who are often sick, have higher levels of glyphosate in their urine than healthy people.

Acute toxicity is when someone is exposed to a toxin to such a degree that it causes bodily damage. This can cause numerous unwanted reactions, from a mild rash to a headache, to organ and cell damage that leads to death.

The acute toxicity level for accidentally ingesting glyphosate is relatively low. This means that if you inadvertently ate some GMO corn chips at a restaurant every blue moon, you likely wouldn’t end up being ill, because the body would find ways to divest itself of the toxin. However, this study now proves that chronic, repeated exposure to glyphosate and GMO causes long-term and devastating harm to both animals and humans. The chemical interferes with the biochemistry of bacteria, leading to diseases like obesity, Alzheimer’s, Parkinson’s, and cancer.

The scientists conducting the study said:

“Negative impact on the body is insidious and manifests slowly over time.”

The arrogance of RoundUp creators is evidenced in the way that glyphosate chemicals harm human beings, because it mimics what it does to plants. RoundUp kills plants by interfering with their ability to synthesize amino acids, referred to by scientists as the shikimic acid pathway – a seven step metabolic pathway that bacteria, fungi, algae, parasites, and plants utilize for the synthesis of phenylalanine, tyrosine, and tryptophan. Without conducting any testing over the long term, the creators of the atrocious glyphosate simply assumed that it wouldn’t harm humans in the same way because the pathway is not found in humans.

What they failed to ponder or simply overlook while on Monsanto’s payroll, however, is that glyphosate does affect bacteria, and our bodies are teeming with it. Our immune system is absolutely dependant upon the healthy balance of bacteria in our gastrointestinal tracts, and this is primarily how we assimilate amino acids, too. It hardly makes sense that a team of biologists and biotechnologists didn’t question whether such a chemical concoction would affect the good bacteria of human beings. More likely, shill scientists were completely aware this was a possibility and they simply ignored the eugenics-bent philosophy of their benefactors.

People are chronically sick on glyphosate, and yet we have allowed biotech to plant almost 90% of our land with GMO. In the words of the famous comedian, George Carlin, “I wanna live. I don’t wanna die. That’s the whole meaning of life: Not dying! I figured that [expletive] out by myself in the third grade.”

If you want to live and be healthy, then tell the government, the FDA, and everyone you know: GMO has got to go.

2 responses to “New Study: Chronically Sick People Have High Levels of Sinister Glyphosate in their Urine”