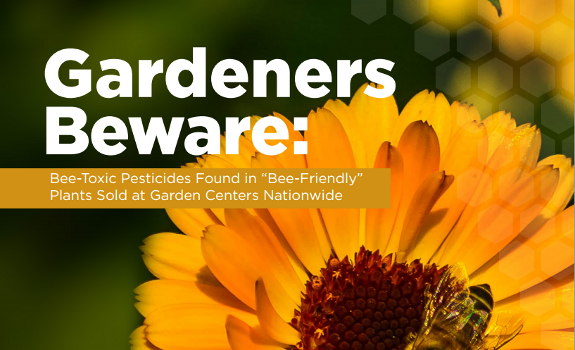 Between the butterflies and the bees, almost all of our food crops are pollinated. Without these small creatures, we would starve (almost), but biotech thinks they are disposable. This might be why thousands are going to swarm Home Depot and Lowe’s this week in support of Bee Week of Action. 27,000 people are planning to tell these companies that they should stop selling pesticides that harm bees, and ‘show them some love’ instead.

If you can’t get the makers of the product to stop making it, consumers can certainly put pressure on the people who sell the stuff to cease and desist. Canada has already seen the death of more than 37 million bees, and the US has similar numbers, reported by bee-keepers.

Many organizations are participating in the effort. Beelieve, Beyond Pesticides, Beyond Toxics, Center for Food Safety, CREDO Mobilize, Friends of the Earth Canada, Northwest Center for Pesticide Alternatives, Organic Consumers Association, Pesticide Action Network, SumOfU,s and the Xerces Society for Invertebrate Conservation will all have representatives for the bees showing up at Home Depot and LoJoinwe’s. But it doesn’t end there.

Participation is nationwide, too. From Chicago to Minneapolis,  San Francisco to Oregon, people involved in “BeeAction.org’s” campaign want retailers to stop selling neonicotinoids — the most widely used class of pesticides in the world. There is a growing heap of evidence that supports a theory linking bee death to this pesticide. When you also consider the recent scientific studies showing monarch butterfly decline due to the use of RoundUp and the near instant death of bees who consume RoundUp chemicals in flower pollen, why would anyone want to keep selling these chemicals?  The FDA seems to have ignored this fact, so it rests on consumers to put things right.

Just last year, bee keepers reported losing 40-100 percent of their hives due to bee die-off. With the crazy weather we’ve experienced lately along with the pesticide Armageddon bees and other pollinators have to endure, its no wonder they are dying in droves.

Read: List of Foods We’d Lose Without the Bees

Furthermore, a report released last summer says that many bee-friendly garden plants sold at Home Depot and Lowe’s contained neonicotinoid pesticides, yet they sold them to customers without letting them know.

Lisa Archer, director of the food and technology program at Friends of the Earth U.S. says, “We’re calling on these stores to help solve the bee crisis by immediately removing neonicotinoid pesticides and home garden plants that are treated with these harmful chemicals from their shelves.”

It isn’t just the bees that are being affected by neonicotinoids, though. The European Food Safety Authority cited evidence that two neonicotinoids, acetamiprid and imadacloprid, “may affect the developing human nervous system” of children, and they recommended further restricting their use. The UK’s top garden retailers, including Homebase, B&Q and Wickes, have voluntarily removed neonicotinoid-containing products from their shelves.

“We must take immediate action to address the bee crisis. Europe has banned bee-harming pesticides, retailers in the UK are refusing to sell them, and it’s time for Home Depot and Lowe’s to come to the table and make a serious commitment to stop selling products that are killing bees before the spring planting season begins. . .In the meantime, gardeners should start their plants from untreated seeds or choose organic plants for their gardens.”

The EPA won’t even look at neonicotinoid pesticide use until 2018, despite the fact that there is growing evidence these chemicals are poisoning the planet. Also, despite the fact that over a million people have commented publicly that bees need protection. Last year, U.S. Representatives John Conyers (D-Mich.) and Earl Blumenauer (D-Ore.) introduced the “Saving American’s Pollinators Act,” but it can’t be passed until the FDA puts their two cents in.