In fear of rising food prices and more

A judge recently halted the merging of two of the largest food corporations in the world – Sysco and US Foods. Think of Sysco and US Foods like Comcast and Time Warner Cable. Were they to merge, the global market would be under the control of two corporations who already distribute ‘food’ to the masses which likely causes diabetes, obesity, digestive disorders, and neurological disease – only with twice the power to do so.

Sysco and US Foods have been trying to merge for over a year now, but just weeks ago, a judge filed a preliminary injunction to halt the proposed merger. This amounts to a fatal blow to two companies that have already done more than their part to ruin the food supply.

The decision is also a victory for the Federal Trade Commission, which sued in February to block the deal on the grounds that it would lead to higher prices and worse service for customers like restaurants and schools.

The FTC failed to mention the practice of Big Food to serve up absolute garbage to our school children, or to stock grocery store shelves with brands that contain health-damaging ingredients such as MSG, high fructose corn syrup, GMOs, artificial colorings and flavors, and about ten thousand other ingredients that don’t belong in what we eat. (For a list of US Foods brands, click here.) To see what kind of nutrition-lacking goop Sysco serves up, click here. 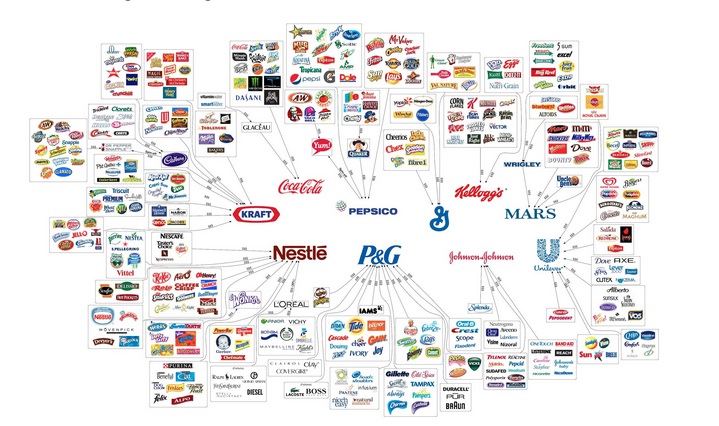 Sadly, there are really only ten food companies that control almost every brand we buy in traditional grocery stores. Instead of growing organically on small farms and practicing sustainable agriculture, these mega-companies look for the cheapest way to call some chemicals in a pretty box ‘food’ and pass it off to us consumers.

If you see your favorite brand in the infographic above, look for alternatives. You can be a part of dissolving the non-food food empire.