As scary as you think? Maybe not

The next time you squeeze some ketchup onto a ballpark frank at a baseball game, you should know you could be eating pork…or you could be eating someone’s eyebrows or spit. Hot dogs have always had a reputation for containing God-knows-what, but recent DNA testing on wieners revealed the presence of human DNA in small sample of the franks.

But it’s not as scary as you think.

Clear Food, a subsidiary of food analyzation startup Clear Labs, collected 345 samples of hot dogs and sausages – the traditional kind and the veggie variety – from 75 different brands at 10 different retailers and found that 14.4% of them were “problematic.” The samples were considered as such if they contained ingredient substitutions or additions or hygienic issues.

“Substitution occurs when ingredients are added that do not show up on the label. Hygienic issues occur when some sort of non-harmful contaminant is introduced to the hot dog, in most cases, human DNA,” said Clear Food in their study.

In other words, the ingredients on the package didn’t always match what was in the samples. We’re pretty sure there aren’t any hot dog packages that list “people” as an ingredient, but 2% of the samples contained trace amounts of human DNA, probably from saliva or hair. Now that’s a hygienic issue. At least investigators didn’t find a finger, but still… [1]

Related: Hot Dogs and Processed Meats as Bad as Cigarettes?

Pork was found in 3% of samples, mostly in products advertised as chicken- or turkey-only, a discovery that is likely very disturbing to those who avoid pork due to religious reasons. In products not supposed to contain them, 10 contained traces of chicken meat, 9 pork, 4 beef, 3 turkey and 2 lamb. [2] 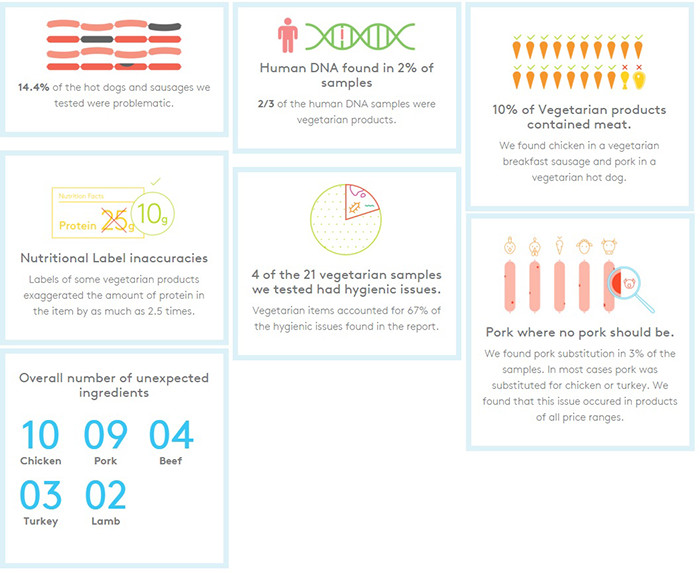 “While some of these substitutions, hygienic issues, other variances, or off-label ingredients may be permitted by the FDA, our scientific disclosure allows you, as the consumer, to decide whether the variance or problems meet your personal standard in your buying decision,” Clear Food says in their study.

Clear Food says the best retailers for hot dogs and sausage products are Target, Walmart and Safeway, and the top brands (in order) are Butterball, McCormick, Ekrich, and Hebrew National, all of which received a “Clear Score” of 96. But if it’s vegetarian products you’re looking for, your best bet is to make a trip to Trader Joe’s.