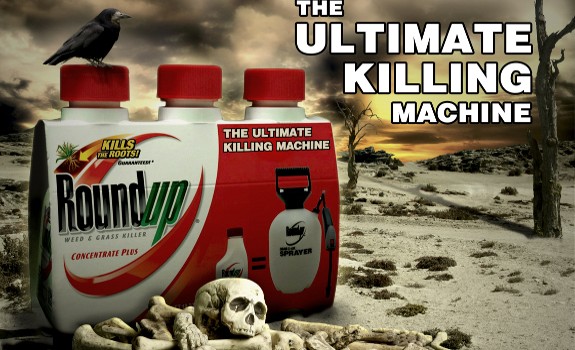 A new study published in Pesticide Biochemistry and Physiology entitled, “The effect of metabolites and impurities of glyphosate on human erythrocytes (in vitro)”, explains just how RoundUp chemicals are invading our human blood.

It is so bad that few in the agricultural community will admit just how potent the combination of these chemicals truly is. They are contaminating our entire biosphere, and the continuation of GMO crops will only add to the growing toxicity levels since they require ever more use of weed-killers, herbicides, and pesticides to continue to be viable.

Just try to escape from glyphosate (N-(phosphonomethyl)glycine) – the main ingredient in Round Up, Monsanto’s best selling poison. It is utterly toxic, in the parts per trillion range. Even infinitesimally small amounts of this stuff can cause cancer, inhibit proper endocrine function, cause birth defects, and inflict infertility upon unsuspecting women.

The weed-killer has been found in people’s blood in 18 different countries, but glyphosate isn’t the only problem. The ‘inactive’ ingredients are just as harmful, making ‘RoundUp Ready’ chemicals a toxic blood-venom none of us can ignore.

The background context of the new study are described:

“Today, the dissemination of glyphosate in the environment increases, and humans are permanently exposed to its action. Worst case scenario provides even ten-fold increase of using a glyphosate in the following years [32]. Considering the widespread and frequent use of glyphosate throughout in world, thus the current risk assessment is important because the exposure will concern not only the users of the preparations containing glyphosate, but also those who do not have direct contact with that herbicide.”

The following indicators of damage were measured:

The Study and Toxic Effects

Researchers exposed participants’ blood to different levels of glyphosate consistent with the ranges and concentrations which have already been well established in our drinking water, air, soil and food – between .01-5 millimolar (mM) for 1, 4, and 24 hours. The authors explain that their choice of ranges “are within the range of the concentrations that are present in the blood of persons not exposed (.01 mM) or may enter human organism only as a result of acute poisoning (0.05–5 mM)”. For example, California currently allows 1000 times more glyphosate in their drinking water than has been proven to cause breast cancer.

Meanwhile, the U.S. EPA has proposed to hike allowable limits of glyphosate in GMO crops and in animal feed from 100 parts per million (ppm) to 400 ppm, essentially telling all of us, “Let Them Eat Roundup Ready Cake.”

Even living near a farm that uses glyphosate can expose someone to levels that are deadly. And certainly farmers that are exposed to the chemical are in danger, quite possibly explaining the recent rash of mysterious fatal kidney disease all over the globe linked to none other than RoundUp use.

The authors also explained their choice of red blood cells for toxicological evaluation: “Damage to erythrocytes is widely used as indicator of toxicity of numerous xenobiotics. Pesticides, drugs and other toxic compounds are transported by blood of living organisms, thus they enter red blood cells.”

The study minimizes the use of glyphosate and does not include the significance of other chemicals in RoundUp. There is a synergistic and cumulative toxicity level that this particular concoction can cause. The ‘other’ ingredients cannot be ignored, and used in connection with glyphosate itself can cause over 40 different adverse health conditions.

“. . . a higher toxicity than the active substance itself. Earlier research provided by Pieniazek et al. [22] showed that glyphosate at the concentration of 1500 ppm (corresponding to 9 mM) after 24 h incubation with human erythrocytes induced hemolysis of about 3%. Additionally, Bukowska et al. [52] reported that Roundup Ultra 360 SL provoked slightly stronger changes in the function of the erythrocytes than its active substance glyphosate, which was probably a result of its additives. Roundup Ultra 360 SL caused slight hemolysis of human erythrocytes, but the differences were statistically significant starting at the concentration of 1500 ppm after 1 h of incubation and at 500 ppm after 24 h of incubation.”

2 responses to “Exposing Monsanto’s RoundUp and Glyphosate: Human Blood is Not ‘RoundUp Ready’”