At least consider the potential dangers

As reported by one of the major British dailies, tens of thousands of teenage girls have been stricken with a debilitating illness following “routine” HPV vaccinations.

How often do we now read similar headlines? This issue concerning childhood and teenage vaccination programs will only get bigger until the vaccine manufacturers conduct the high integrity studies which are necessary. The rising incidence of secondary illness and concerning symptoms is simply too compelling not to take seriously.

By seriously we mean that every untested and unproven vaccine ought to be removed from the healthcare marketplace. Otherwise, the sensitive and developing bodies of children will continue to have reactions that can sometimes evolve into a full-blown disease process.

What kinds of reactions are occurring in those cases of the HPV cervical cancer jab in Great Britain?

So far the main side effects include:

These reactions were catalogued among the “8,228 adverse reaction reports in 10 years” and that number has been estimated to be only 10% of actual number of reported cases. This list does not include the many patients who are wheel-chair bound by the apparent effects of this particular vaccine.

Providing a vaccine for a cancer, which is highly unlikely to develop in the first place, has always been a questionable medical practice.

Because of the explosion of various types of cancer in the modern era, it is quite likely that a vaccine will ultimately be formulated for the vast majority of them. Vaccination programs are well known for their ‘one-size-fits-all’ approach irrespective of so many significant factors and variables. Each child or teenager possesses their own unique biochemistry, physiology and genetic predispositions.

They also inhabit different environments and can eat radically different diets. Because of these and other factors, allergic reactions will vary widely among children in any age group. So, too, will various types of non-allergic sensitivities and intolerances which they are either born with or will develop due to various environmental influences.

Standard medical practice is such that every patient is treated alike when it concerns the administration of vaccination programs. By not taking into consideration an individual’s susceptibility due to the aforementioned factors, millions of children are now faced with the very real prospect of developing adverse reactions, and in some cases lifelong debilitating illnesses.

For instance, of the 8228 reactions noted above “more than a quarter of these reports were classed as ‘serious’, a category that includes symptoms severe enough to require hospital treatment or even be life-threatening.” [1]

That’s an extraordinary number of hospital treatments for a jab that is supposed to be given to prevent the development of cervical cancer. Many parents are now finding the jab to be a rather extreme measure, especially for those families that are taught not to engage in risky sexual behaviors.

Physicians are not listening to their teenage patients or the parents, or both.

Herein lies the biggest problem in the monitoring of these ongoing vaccination experiments on the children throughout the world. The doctors are firmly in the driver seat throughout the entire process, and they are being heavily influenced by the pharmaceutical companies. Because of this state of affairs, the clinical realities are not being properly recorded or disseminated to those who ought to be informed.

Surely the childhood victims and their parents are delivering the distressing physical symptoms and sicknesses as they are experienced. Unfortunately, they are either not taken seriously or not validated when the adverse health conditions become too serious.

“And they say girls who fall ill after vaccination are not being taken seriously by GPs when parents suggest the illness could be vaccine-related. Jackie Fletcher, of pressure group Jabs, said: ‘Previously fit and healthy young girls have developed seizures or viral fatigue, some have lost the ability to walk. And years on, some have still not recovered.” [1]

This predicament will only continue to deteriorate until the entire healthcare delivery system acknowledges these scientific facts about vaccine side effects. The medical profession along with the pharmaceutical companies must also admit to the lack of understanding about how these powerful vaccines affect young delicate bodies, many with fragile immune systems. 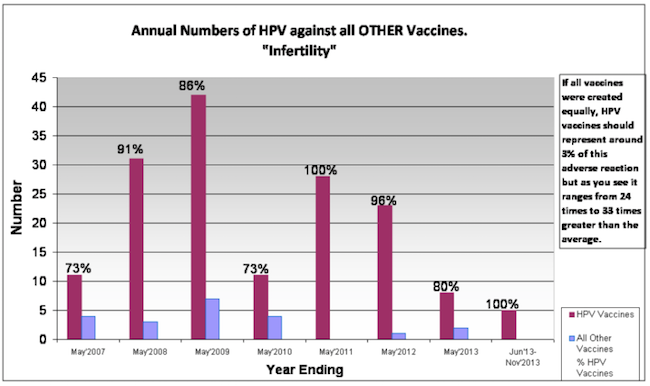 Infertility has also been identified as a major unintended consequence of the HPV vaccine. The chart above illustrates just how serious the problem has become. Young girls are now being set up for a lifelong challenge with infertility because the vaccine lacked any kind of proper research into this important aspect.

Parents have the ultimate responsibility for the health and welfare of their children. It’s therefore incumbent upon them to do the necessary due diligence on any medical procedure that is performed on their child. Only a well informed and proactive parent can approach this matter keeping the child’s best interest as the highest priority. Only in this way will the children of the world be properly protected and ensured a healthy life free of avoidable pain and suffering.