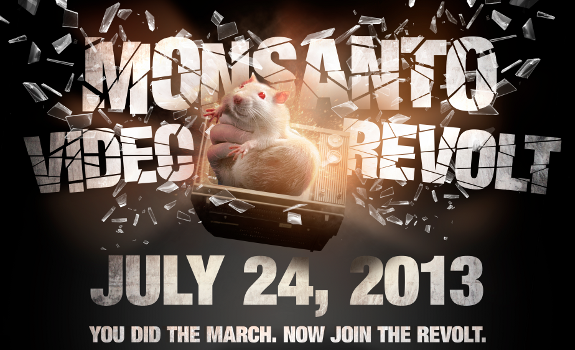 With the tremendous success of recent grassroots activism against the mad scientist corporation known as Monsanto, I am teaming up with Mike Adams of NaturalNews and Dr Edward Group of Global Healing Center in announcing a massive new online campaign that is aimed at bringing the fight against Monsanto to a whole new level online.

On July 24th (and even before then), we are calling for all concerned citizens, those who just want to eat real food that’s not polluted with GMOs, activists, and others to create and upload a video of any length telling Monsanto why you stand against their control of the food supply and mutation of crops worldwide. The Monsanto Video Revolt is a manifestation of resistance against the GMO juggernaut that is Monsanto and its attempt at genetically manipulating every piece of food on your dinner table.

We’ve seen a lot of successes lately against Monsanto (namely the March Against Monsanto), as well as an increased overall awareness that has sprung up against Monsanto and GMOs at large. It’s time to utilize the free platform of the internet to not only ensure that our voice is heard, but to demand that politicians turn activism into legislation. States are coming out to draft and enact GMO labeling legislation like never before, but it’s essential that we push legislators to get the job done or get out.

Amazingly, we’re already seeing a large degree of support for the Monsanto Video Revolt, with RT announcing the campaign internationally and posting my announcement on their #1 news Youtube channel which holds over 1 billion views.

The Monsanto Video Revolt Is On

For too long have we allowed those who we voted for to choose corporate interest over public desires and public health. In the past I have published an extensive list of politicians paid off by Monsanto, and let it be known that the list is just the very tip of the iceberg. Monsanto’s tentacles within the United States government and beyond extend so far and so deep that our very taxpayer dollars are now funding their expansion overseas. We’re talking about taxpayer dollars going into the purchase of marketing DVDs and pamphlets for Monsanto.

The madness needs to end, and we’re going to ensure that it does. Through peaceful revolution, the Monsanto Video Revolt will make major waves. Because if we lose the integrity of our food, if we lose the bees responsible for virtually all major food items on the planet, what else do we have? What good will the dirty cash do?

I encourage you to get the word out on this grassroots campaign against Monsanto, as it may be the final proverbial stake into the barely-beating heart of Monsanto. Whether you are a reader with your own website and blog, your own Youtube channel, or even just a reader with a webcam and a Facebook page — it’s essential that you answer this call to arms against Monsanto and GMOs by uploading your videos before and on July 24th to all of the major video websites.

How to Join In

Being a part of this historical revolt against Monsanto is extremely simple, and absolutely anyone can be on the right side of history in this campaign against corporate corruption and genetic manipulation. Joining in can be broken down into 3 extremely simple steps:

Step 1: Create your video of any length telling the world why you are against Monsanto and their GMOs with ‘Monsanto Video Revolt’ in the title.

Step 2: Upload your video to all of the major video websites like Youtube, Vimeo, and NaturalNews.tv (where it won’t be censored and we will have a livestream).

Step 3: Blast out your video, spread the word via Facebook and send it out to your local and state politicians as well as Monsanto executives.

It’s extremely simple and everyone can join in. We are also encouraging everyone who uploads their videos to share them with us through the Monsanto Video Revolt Facebook page.

Perhaps the best part about the Monsanto Video Revolt is that it takes the fight online in a major way that has never been done before, therefore eliminating the major problem of mainstream media censorship. For example, I am a huge proponent of the March Against Monsanto, but the mainstream media simply chose to not send a camera crew to cover the event. I even went with a camera crew of my own to the march in Philadelphia while travelling and was the only one with a news team at the whole event.

Physical protest events are great and should continue to go on as an integral piece of the revolutionary puzzle against Monsanto, but bringing the fight online enables us to reach millions with just a few clicks. Instead of having all of the event that the cameras don’t pick up at physical protests go down the memory hole, we will have millions around the internet being exposed to this barrage of Monsanto Video Revolt uploads who may have otherwise never cared. People who may turn out to be activists and individuals who accelerate change on a whole new scale.

Be a part of the Monsanto Video Revolt, and tell Monsanto it’s time to get out of the world’s food supply. It’s time to stop Monsanto’s conveyor belt of disease-breeding GM creations before it’s too late.