‘High Risk’ GMO Potatoes on the Market: What the Public Needs to Know

Many genetic engineers have been vocal in their concern over genetically modified (GM) potatoes, but perhaps the most surprising voice is that of Caius Rommens, the creator of 1 type of engineered spud.

Rommens was director of research at Simplot Plant Sciences from 2000 to 2013, where he led the development of the GM Innate potato. Over time, the scientist began to have doubts about his own work and the health risks of consuming the potatoes, which are now available in more than 4,000 U.S. supermarkets.

In fact, Rommens was so concerned that he wrote a book, Pandora’s Potatoes, which was recently published. In the book, he details how his excitement over GMO technology eventually turned to dread as he began to realize the potential health and environmental hazards his creation could unleash.

EcoWatch recently interviewed Rommens about his role in developing Innate potatoes and the concerns that have since arisen in his mind about the genetically engineered vegetable. [1]

In the interview, Rommens explains that he started out working for Monsanto (now Bayer), but left to join Simplot to “start an independent biotech effort.”

His intentions were good, to be sure.

He believed he could develop a potato that resisted bruise and blight, and that could be used to produce French fries that were less colored and less carcinogenic than regular fries, among other touted benefits.

Innate potatoes are created by silencing genes using a process called RNAi, and Rommens’ concern is that “the silencing that takes place inside the GM potatoes affects the genes of animals eating these potatoes.”

He is most bothered by the fact that research indicates the gene-silencing constructs in the potatoes are active in pollen. This could have a detrimental effect on bees that use GM potato pollen to feed their larvae.

Furthermore, silencing the genes responsible for browning in potatoes increases toxins that accumulate in GMO potatoes.

“Ex-colleagues of mine had shown that PPO-silencing increases the levels of alpha-aminoadipate by about 6-fold. Alpha-aminoadipate is a neurotoxin, and it can also react with sugars to produce advanced glycoxidation products implicated in a variety of diseases.”

EcoWatch notes that a Monsanto GM corn variety was found to have high levels of alpha-aminoadipate, leading the company to rescind an application for its approval in Europe in 2009, after safety regulators raised questions.

While there is no data showing how much alpha-aminoadipate Innate potatoes contain, Rommens said he believes that Simplot should meticulously determine these levels. 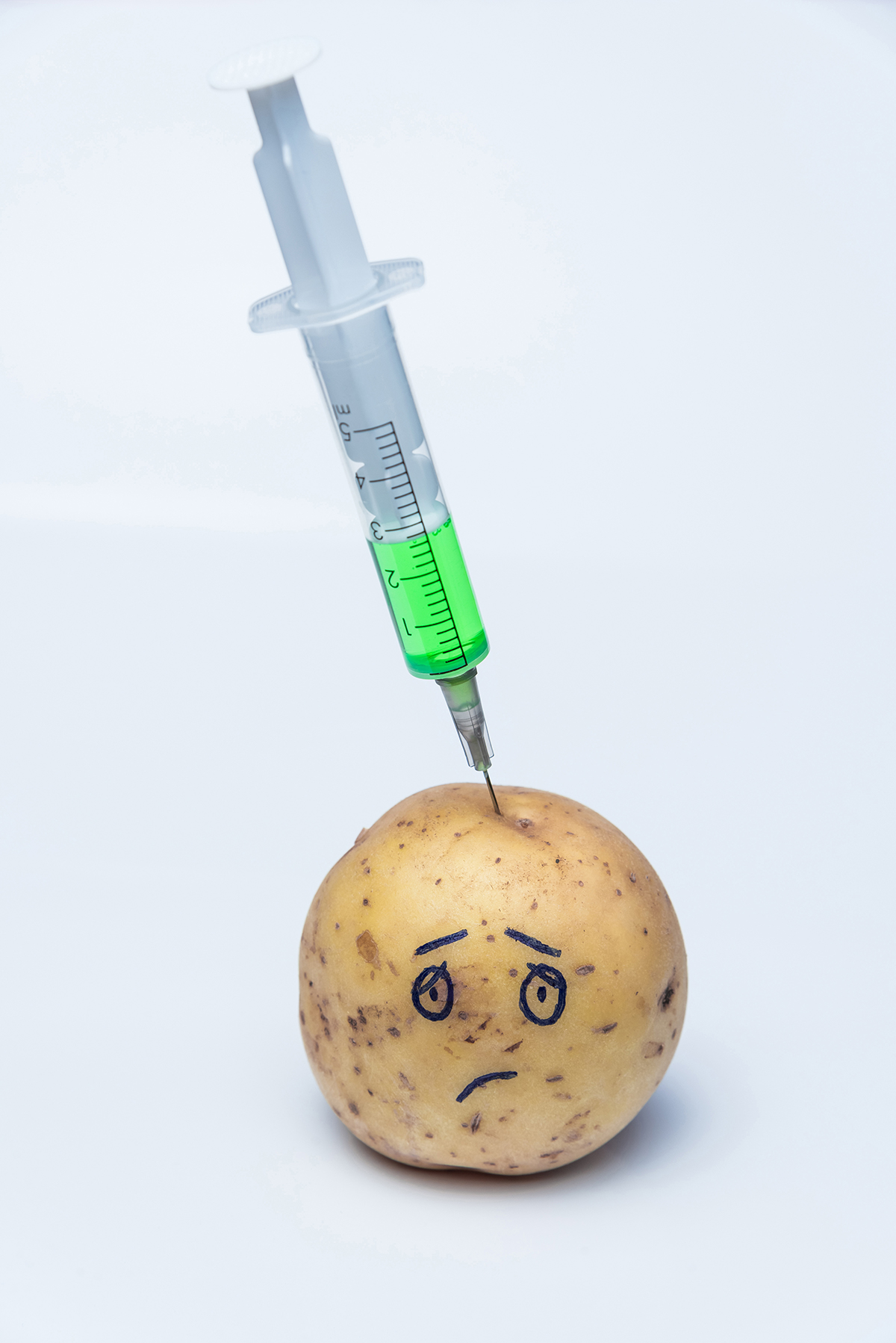 The GMO potatoes also contain another potential toxin called chaconine-malonyl. Not much is known about the substance, but Rommen said his ex-colleagues found that it increased by nearly 200% when PPO genes are silenced.

PPO-silencing prevents bruising, Rommens explained … or so he thought. This particular aspect of genetic engineering was unnecessary, as the GMO potatoes can still have invisible bruises that “are entry points for pathogens and exit points for water, which are 2 important issues during storage.”

According to Rommens, genetically engineering the potatoes to avoid plight might have been a useless venture as well. And as for the Simplot potatoes being turned into less-carcinogenic French fries, well, that might just be wishful thinking.

“The GM potato does contain a resistance gene that provides protection against late blight. The problem is that nobody knows how long the protection will last. Plant breeders have tested many different resistance genes in the past, and these genes are almost always overcome by quickly evolving pathogens.

Another issue is that late blight is usually accompanied by other pathogens. In humid regions of the world where late blight is most active, there are dozens of other pathogens. So, growing GM potatoes with a single resistance gene in, for example, Bangladesh is like getting vaccinated for one tropical disease and then moving to the tropics where there are many other diseases.

In the end, Rommens said, he didn’t put enough thought into the possibility that his modifications might have caused “unintended effects.” Upon studying publicly-available literature, however, he realized he had missed the forest for the trees, as the old saying goes.

“My GM potatoes had ‘hidden’ issues – like Pandora’s Box.”

He said he believes the potatoes entering the market should be “evaluated for the incidence of hidden bruise and infections and the range in levels of toxins, such as alpha-aminoadipate and tyramine.”

Innate potatoes have been added to the High-Risk list of the Non-GMO Project Standard because the variety is now “widely commercially available” in the U.S. [2]

The Project has an established set of criteria that it uses to determine if a crop needs to be moved from the Monitored-Risk list to the High-Risk list. This set of criteria helps tease out whether a crop has the serious potential to spread GMO contamination in the conventional and non-GMO supply chain.

The potatoes’ addition to the High-Risk list means that products made with potatoes will undergo added scrutiny before they can become Non-GMO Project Verified.

“Browning is nature’s most visible way of letting you know a product is rotting. GMOs that use RNAi to mask the signs of bruising could lead consumers to unknowingly ingest an unhealthy, toxic product.”

Fortunately, it’s easy to avoid GMO potatoes at the supermarket. They are sold under the names White Russet or Simplot Innate. If you see those on the label, keep moving.

Always buy organic or non-GMO produce, whenever possible, as this will spur a greater demand for these types of products.

3 responses to “‘High Risk’ GMO Potatoes on the Market: What the Public Needs to Know”