As pesticide use peaks

President of the Portuguese Medical Association, José Manuel Silva, is calling for a worldwide ban on Big Ag’s most used herbicide, glyphosate. With so many health concerns surrounding the chemical, its days are surely numbered. [1]

The announcement follows the World Health Organization’s Cancer research arm, the IARC, called glyphosate ‘probably carcinogenic,’ followed by the State of California’s move to force Monsanto to label Round Up bottles with a carcinogen warning.

The Portuguese Parliament approved the new statutes of the Portuguese Medical Association, which allow for a significant improvement in its management, organization, and response time. Issues of ecological stewardship are among Silva’s concerns. He reminded his peers that even Pope Francis has been emphasizing ecological issues.

Among these is the use of glyphosate. This is the most used herbicide in Portuguese agriculture and urban areas for weed control.

“In the last decade, glyphosate use has increased about 50%, with 1400 tons applied in 2010 alone. In total, more than 130 million tons a year are used around the world. Because of this glyphosate is routinely detected in food, air, rainwater and rivers, urine, blood and even breast milk.” [1]

Ecowatch states that between 1996 – 2011, the widespread use of Roundup Ready GMO crops sparked an increased herbicide use in the U.S. by 527 million pounds—even though Monsanto claimed its GMO crops would reduce pesticide and herbicide use.

Glyphosate is used so profusely that the legal limits have had to be stretched in many countries for it to be allowed. Numerous studies are now showing that the overwhelming amount of glyphosate used is causing increased risk factors the development of celiac disease, infertility, congenital malformations, kidney disease, autism and other pathologies.

‘Mortality in acute intoxication varies between 3.2 and 29.3%, mostly by pulmonary or kidney disease, or both. The various pathological mechanisms for glyphosate are well-known and include changes in the intestinal micro-biome, disruption of cytochrome P450, vitamin deficiencies, metal chelation, molybdenum and selenium deficiencies, etc.’

These findings are duplicated again and again, even though mouthpieces for the biotech industry swear that glyphosate in breast milk should be of no concern. The industry claims:

“Human exposure to glyphosate most often occurs from the very minute amounts that remain on food that is consumed. Since it is among the safest agents used to control weed growth the US Environmental Protection Agency has set an Allowable Daily Intake (ADI) of 1750 micrograms (ug) of glyphosate for every kilogram (kg) of body weight.”

But even if this is true, they are discounting ample evidence that more glyphosate is being used, and it interacts with other chemicals that cause environmental and health degradation.

Many studies argue that the amount of glyphosate people are being exposed to is far higher than earlier estimates provided by the industry. Americans are more at risk for increased exposure than Europeans, too, since so many of our crops – soy, corn, cotton, etc. are grown with Monsanto’s GM ‘Round Up Ready’ seeds. 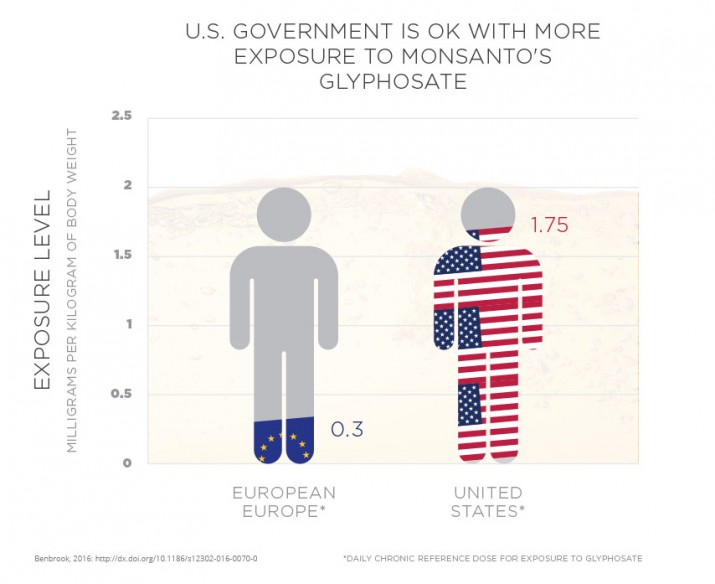 The president further notes that 3 of the studies referenced by the IARC showed a connection between glyphosate exposure and non-Hodgkin lymphoma (NHL), whose incidence has increased significantly in the last 30 years.

Furthermore, two additional bits of information suggest the IARC is erring on the conservative side. The first is that evaluations have focused on the active ingredient – glyphosate itself – even though the commercial formulation contains other chemical compounds, often called ‘inert ingredients.’

For example, herbicides such as glyphosate are often mixed with POEA, polyoxyethylene alkylamine, to make the herbicide glyphosate more efficient. Meanwhile, POEA is known to be more highly toxic than glyphosate.

Consistent research shows that a significant share of the pesticides’ total toxicity may be attributed to these adjuvants, or inert ingredients. Despite its benign reputation, Roundup is among the most toxic herbicides used anywhere in the world.

Moreover, human beings are exposed simultaneously to chemical compounds of multiple origins which may interact synergistically. Once you add glyphosate to the other 5.2 billion pounds of various pesticides used around the globe annually, it is a toxic mix like none one could imagine.

“Taken together, this data suggests that a careful reflection on glyphosate’s future, and globally on the management of food chemical risks, is in order. The worldwide acknowledged precautionary principle says that, in the face of clear evidence of harm, action to protect human health and the environment should not wait for final scientific evidence. For glyphosate the conclusion is clear: this herbicide should be banned worldwide.”

He says that in Portugal the Government and the Directorate-General for Health must take the lead. Economic interests cannot, and must not, suppress the moral imperative of citizen health protection. The sluggishness of legal procedures does not excuse inertia either.