Reusing the bottles uses 93% less energy than making new ones

The first statewide refillable bottle system has come to Oregon, where 7 breweries now offer beer in returnable, refillable bottles. The program cuts down on plastic waste and lets people enjoy an ice-cold adult beverage without BPA and the other harmful chemicals that can leach out of the plastic lining of aluminum cans. [1]

“Every time that bottle gets reused, you’re cutting the carbon footprint of that bottle in half. It’s the most sustainable choice in the beer aisle.”

Some research suggests that reusing bottles cuts their carbon footprint by even more than that; a study out of Canada found that once a refillable system gains traction, 98% of the bottles get returned, and it uses 93% less energy than creating a new container.

It takes between 47% and 82% less water to wash refillable bottles than it does to make new single-use bottles for the delivery of the same amount of beverage.

The new bottles can be refilled up to 40 times. Customers can drop them off at any of the OBRC’s 21 redemption centers. [2] [3]

“We’re in a really unique position to make this work. We’re introducing a bottle we can sell to any brewery that’s interested in using that bottle.”

The new, thicker bottles now lining store shelves in Oregon are composed of mostly recycled glass. The bottles were designed so that they could be easily separated from the rest of the glass in the existing bottle deposit system, according to Schoening, ensuring that they get refilled instead of recycled. 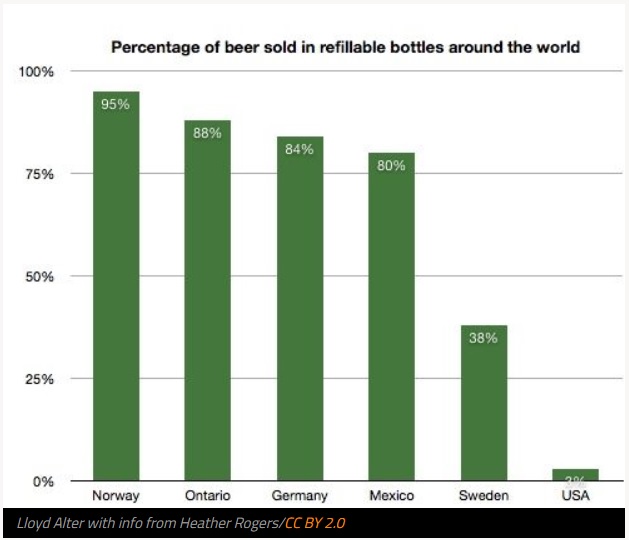 For beer-lovers, however, it’s business as usual, as long as they collect their bottle deposits.

“I like to say all the consumer has to do is choose to buy it. When they go through a machine, they’ll have a unique bar code that will identify them as different from another glass bottle.”

Breweries are only legally allowed to distribute 20% of the beer they put in refillable bottles to out-of-state locations. This prevents too many bottles from being shipped out but never returned.

Schoening hopes that the 7 breweries currently participating in the cooperative will soon have company from cider makers and wineries in the state. He is in talks with several companies about using refillable bottles that might come in different colors.

Additionally, the cooperative plans on offering a loyalty program where buyers who return a box of 12 refillable bottles receive a 20% discount (12 cents instead of 10 cents).

OBRC is also talking with the Oregon Department of Environmental Quality about figuring out exactly how much carbon the program is saving. The cooperative is also trying to bring a bottle-washing facility to Portland, which they hope to build by 2020. In the meantime, all the refillable bottles will be sent to a facility in Montana for washing.