"Glyphosate does not belong in cereal"

A report published August 15 by the Environmental Working Group (EWG) shows how some oat products, including oat cereals, oatmeals, and granola and snack bars, contain unsafe levels of glyphosate – a chemical in the controversial weedkiller Roundup. 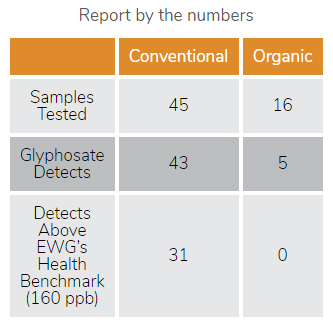 Nearly 3/4 of the oat products tested by the EWG contained higher levels of glyphosate than what the group’s scientists have deemed “protective of children’s health,” the report reveals.

The findings are particularly relevant now that a Superior Court jury in California concluded that the maker of Roundup, Monsanto (now Bayer AG), failed to inform the public that glyphosate could cause cancer. The jury awarded former school groundskeeper DeWayne Johnson $289 million in damages in the first of what could be thousands of trials facing the agrochemical giant. The cases center around lawsuits filed on behalf of plaintiffs and their loved ones alleging that glyphosate causes non-Hodgkin lymphoma.

Monsanto has vowed to appeal the decision.

There are more than 750 products containing glyphosate on the U.S. market, according to the National Pesticide Information Center, a cooperative formed by Oregon State University and the U.S. Environmental Protection Agency (EPA).

Overall, 31 conventionally-grown oat products contained levels of glyphosate above the EWG’s Health Benchmark of 160 parts per billion (ppb). None of the organically-grown products registered above the benchmark.

To establish the benchmark, EWG relied on a cancer risk assessment that was developed by California state scientists, according to Alexis Temkin, author of the report and the group’s toxicologist. [1]

“EWG used that level to then develop a guideline that was more protective for children’s health.”

The EPA has a far different benchmark, however, based on estimates of the potential highest dietary exposure levels for children and adults. According to the agency’s calculations, 1- to 2-year-old children are likely to have the highest exposure at a level 230 times the EWG’s health benchmark. [2] 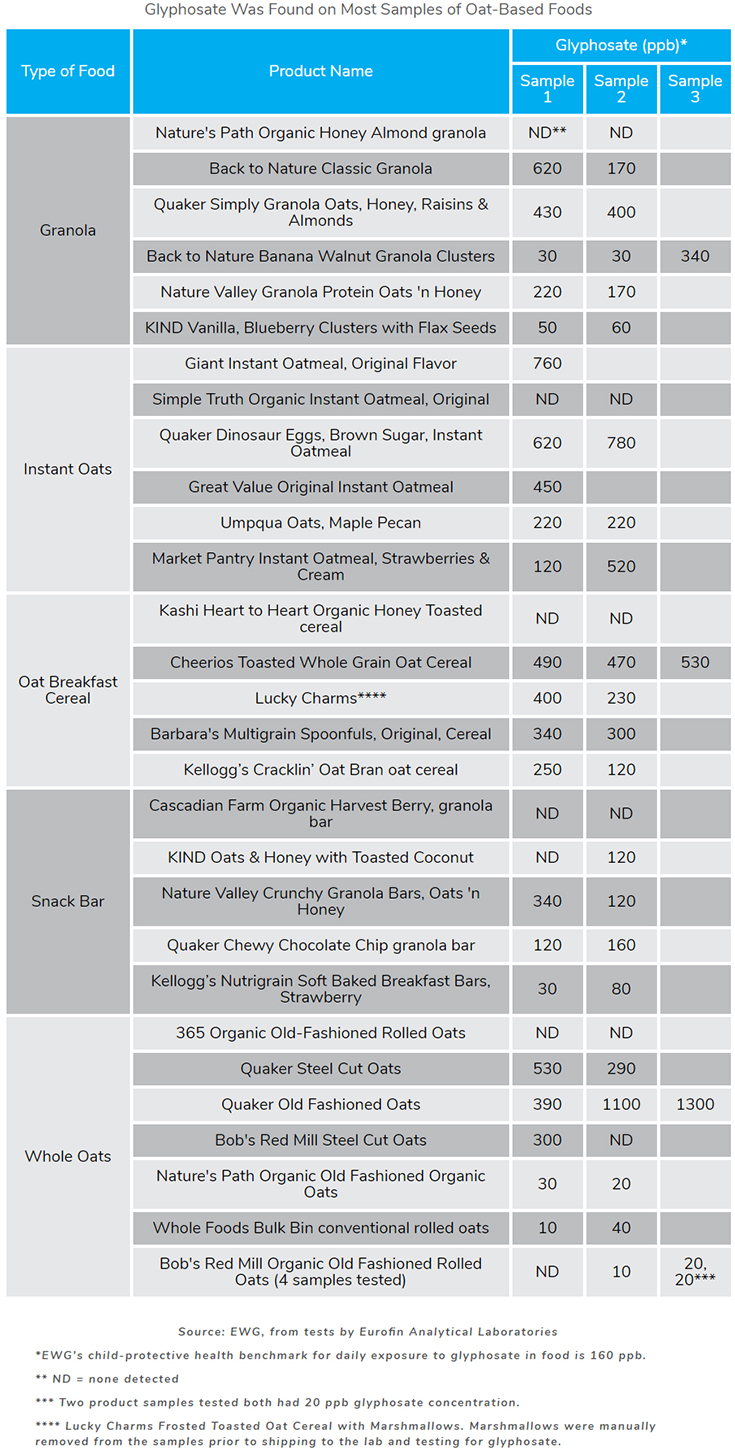 Quaker’s Old Fashioned Oats contained the largest amount of the Roundup ingredient, at 1,300 ppb of glyphosate.

Roundup is the most heavily used herbicide in the world. One study from 2012 states that 18.9 billion pounds (8.6 billion kilograms) of glyphosate have been used globally. Another 2016 study says that Americans have applied 1.8 million tons of glyphosate since its introduction in 1974, while 9.4 million tons of the chemical have been sprayed onto fields worldwide.

The Roundup chemical has been detected in a variety of different foods in the past, including oat products. In 2016, testing conducted by the U.S. Food and Drug Administration (FDA) found trace amounts of glyphosate in a number of oat products, including plain and flavored oat cereals for babies.

The presence of glyphosate in Quaker Oats appears to be an ongoing problem. The Taiwanese government recalled 137,000 pounds of oat products, including Old Fashioned Quaker Oats, because the country has a zero-tolerance policy when it comes to glyphosate in oats.

PepsiCo, the owner of Quaker Oats, has even faced lawsuits in the past filed on behalf of buyers who allege Quaker’s “100% natural” label constitutes false advertising because the product contains glyphosate.

In the report, the EWG says that “glyphosate does not belong in cereal,” and urges readers to pressure the FDA to restrict pre-harvest applications of glyphosate, and “tell companies to identify and use sources of glyphosate-free oats.”