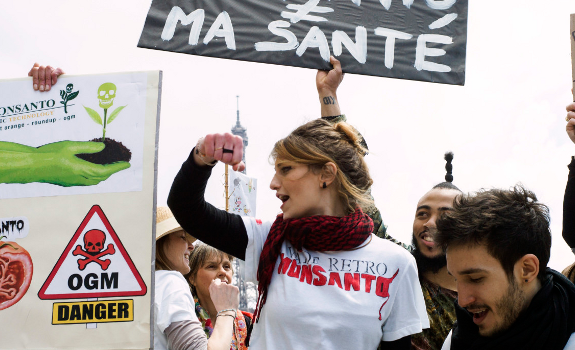 Likely the most hated corporation in the world, Monsanto definitely isn’t winning any popularity contests. But like the delusional “mean girl” in high school, they still think they have a chance at being crowned prom queen purely on the basis of their money. According to MarketWatch, Monsanto announced last week that they will not be seeking approval for new genetically modified seeds in Europe because no one there seems to want it.

A spokesperson for the huge company says it makes no sense to fight for approval when there is such little demand for their products in the region.

“As long as there’s not enough demand from farmers for these products and the public at large doesn’t accept the technology, it makes no sense to fight against windmills,” said Ursula Luettmer-Ouazane.

In reality, we are seeing major movements against Monsanto like never before. As Anthony Gucciardi detailed last week after he was the only one covering the March Against Monsanto in Philadelphia, activism has hit new highs against Monsanto and GMOs — the media just fails to cover it! But, Monsanto—not surprisingly blind to the extreme dislike the majority of people have towards them—seems to think Europeans just need more time to warm up to the idea of genetically modified, tumor-causing crops.

The decision to not seek approval isn’t new, really. As a matter of fact, Monsanto hasn’t sought approval in Europe for two to three years due to the same lack of interest. And with protests against them taking place around the world, the needed-demand isn’t likely to rise anytime soon.

Eight governments of the E.U. have banned Monsanto’s GM corn and other forms of genetically modified crops. In Europe, the corn is only being grown in Spain, Portugal, and a few Eastern European countries. As a matter of fact, Europe only accounts for 12% of the company’s $13.5 billion in global sales.

Monsanto isn’t the only company in the genetically-modified game, however, their competition is also feeling the cold shoulder overseas. BASF, Syngenta, and Bayer AG’s CropScience unit have all “largely pulled out” of the markets of Western Europe.

One thing these countries have going for them are governments who see the dangers of these franken-foods and are standing by their citizens. In the United States, on the other hand, we can’t even get our government to tell us which foods contain GMOs and which do not. Monsanto is getting the feeling they aren’t welcome in Europe, but when will they get the same vibe from Americans?

14 responses to “Europe, Nations Around the World Rejecting Monsanto”