Chlorpyrifos is a pesticide that has the potential to harm both children and farm workers, but the EPA – the same agency that drew these conclusions – says it will not ban the chemical.

On March 26, 2017, EPA chief Scott Pruitt rejected his agency’s own chemical safety experts who, under Barack Obama, had recommended that chlorpyrifos – one of the nation’s most widely used insecticides – be permanently banned from agricultural use nationwide because of the danger it poses to farm workers. [1]

Pruitt’s ruling rejects a petition filed 10 years ago by two environmental groups that requested that the agency ban all uses of chlorpyrifos. The pesticide has been banned for most household uses since 2000. It had commonly been found in products like Raid sprays and Black Flag ant killer. However, it’s still applied at about 40,000 farms on about 50 different types of crops, including almonds, apples, corn, wheat, strawberries, and broccoli. [1], [2] 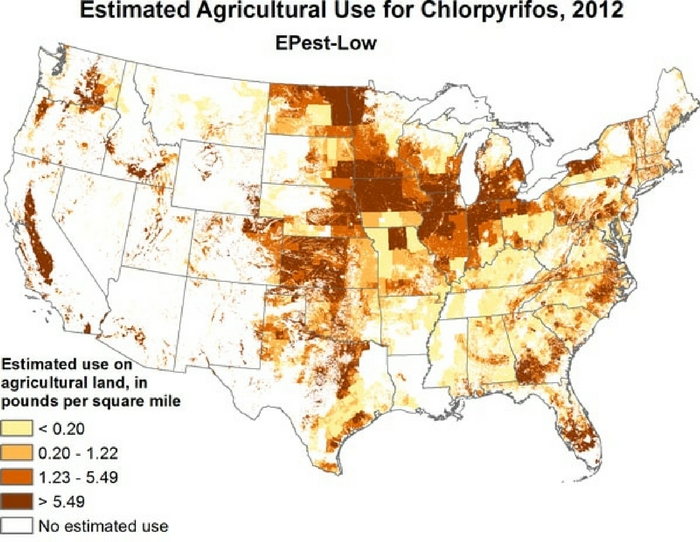 It was late last year when EPA scientists concluded that chlorpyrifos exposure was causing potentially significant health problems, including learning and memory declines, especially among farm workers and young children who may come into contact with the chemical via drinking water and other sources.

According to epidemiologists, these population studies record changes in learning and behavior that can’t be traced in rodent experiments, considered the gold-star of research and the basis for the EPA’s pesticide regulations. The chemical industry doesn’t place much stock in population studies because it claims they are difficult to control and can be attributed to a range of diet, lifestyle, and various environmental factors. [3]

Dow Chemical, which sells chlorpyrifos under the trade name Lorsban, as well as farm groups that use the product shot back that the EPA’s science was iffy at best, especially when the chemical is properly used to kill crop-spoiling pests. [1]

In July of 2016, an EPA scientific review panel comprised of academic experts also questioned some of the chemical safety staff’s conclusions, which led the staff to revise the way it had justified how it had reached those conclusions. Despite the revisions, the staff still concluded late last fall that the chemical should be banned.

But that wasn’t enough for Pruitt, who said in an announcement on March 26:

“We need to provide regulatory certainty to the thousands of American farms that rely on chlorpyrifos, while still protecting human health and the environment. By reversing the previous administration’s steps to ban one of the most widely-used pesticides in the world, we are returning to using sound science in decision-making.”

Sheryl Kunickis, director of the USDA Office of Pest Management Policy, said in a statement:

“It means that this important pest management tool will remain available to growers, helping to ensure an abundant and affordable food supply for the nation.”

Pruitt’s rejection of the ban means the question of the safety and use of chlorpyrifos likely won’t be revisited until 2022, the next time the EPA is formally required to reevaluate the safety of the insecticide.

Patti Goldman, managing attorney at Earthjustice, a San Francisco-based environmental group that represents the Natural Resources Defense Council and the Pesticide Action Network of North America, which filed the petition in 2007 to ban the chemical, said:

“We have a law that requires the EPA to ban pesticides that it cannot determine are safe, and the EPA has repeatedly said this pesticide is not safe.”

Jim Jones, former assistant administrator of the EPA who was responsible for pesticide regulation before he left the agency in January 2017, expressed similar concerns, saying:

“They are ignoring the science that is pretty solid.”

One of the most disturbing studies on the effects of chlorpyrifos on children was published in 2012 in the Proceedings of the National Academy of Science.

The researchers used MRIs to look at the brains of 40 children ages 5.9 to 11.2 years. Twenty of the kids had been exposed to high levels of chlorpyrifos while in the womb, and 20 of them had been exposed to low levels of the pesticide. The team found that the brains of the children with high exposure to the chemical “looked different” compared to those who had low exposure. [4]

The regions of the brains affected by high chlorpyrifos exposure are associated with attention, decision-making, language, impulse control, and working memory.

Another study, published in Environmental Health Perspectives, revealed that more than half of all women exposed to pesticides – including chlorpyrifos – have an increased risk of having a child with autism.

Read: Pediatricians Suggest Farms Using Chlorpyrifos May Be Cause of Increased Birth Defects

The dangers extend to the environment, as well. Keep in mind that this next example comes from the EPA’s own data. A shocking 97% of all the animals on endangered and threatened species lists nationwide are threatened by 3 of the most common pesticides; and of those 3, chlorpyrifos ranks #1. Also shockingly, chlorpyrifos is believed to be a severe risk to 97% of America’s most threatened flora and fauna.

Just how much of the earth’s population has to suffer or die before there’s “enough” evidence that chlorpyrifos should be banned?