Sorry Monsanto... (but not really)

Monsanto isn’t cheering the news that U.S. organic food sales have approached $37 billion annually, up 12% from just a year ago, but the trend shows no sign of slowing. This double-digit growth is expected well into the future, suggests a Nutrition Business Journal report. [1]

Due to pressure from individuals, the annual growth of organic food sales for the nation has exceeded 10% since American economy took a downturn in 2008. That means that while almost every other industry has had to tighten its belt, organic food growers are watching demand absolutely explode.

Top food retailers in the US, including Costco, Kroger, Walmart and Target, have expanded their organic food offerings in recent years due to the forecasted growth of organics, and many companies have announced initiatives that could not only support existing demand, but boost sales even higher.

Starting from just a small base, organic sales have grown to account for nearly 5% of the ENTIRE food market, according to the Organic Trade Association’s estimates.

When you add organic personal care products like shampoo, lotion, lip balms, etc., as well as organic linens and other non-food items exceeding $3 billion in sales alone, there is no question that the demand for organic, non-GMO food will just keep growing.

Certified organic farmland has also expanded, and though it has a way to go before catching up with organic food demand, we’ll be needing that extra acreage to make sure we can keep up with demand for nutritious, pesticide-free food and personal care products. People are tired of paying top dollar for processed, toxic food and other products, and they are voting with their wallets. 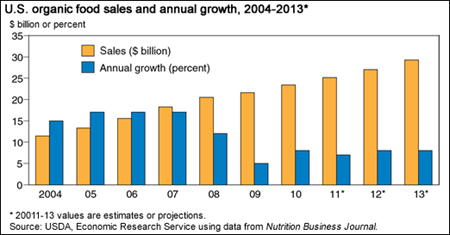 Are you wondering which organic foods are best sellers? Organic fruits and vegetables top the list with organic dairy coming in second. Sales of other organic foods are also shooting to all-time highs, including sales of organic bread, meat, poultry, packaged foods and even organic condiments.

People Purchasing Straight from the Farm

Another big change is for people to purchase their organic products straight from the farm, so to speak. Huge grocery store chains are offering more organic products, but many people are opting to cut out the middle man and go straight to the organic farmer for milk, dairy, eggs, produce, and hand-crafted items.

It seems people want to know exactly where their food is coming from, and to be able to trust that what they are purchasing is indeed organic. This is an understandable market trend, given that companies have been caught touting their products as organic when they were not – Kellogg’s promotion of Kashi, for example.

Individuals are also participating in co-ops, also known as cooperatives, where they can buy a ‘share’ of an organic farm, and be guaranteed a certain amount of organic produce, milk, eggs, or even certified organic honey from local growers.

This new trend supports the small farmer like never before, and stresses the importance of eating local, further eliminating food transportation costs, and damage to the environment resulting from moving billions of tons of food across the country every year.

Much of the population is even making it clear that it is willing to pay for organic products. New producers of organic products can now enter a market eager to accept novel new products that support sustainable growing, and pesticide-free, GMO-free, environment-loving trade.

Just as an example of the money to be made for savvy organic growers – organic grains can fetch up to three times the amount as their non-organic counterparts.

A recent Economic Research Service study based on national survey data found that the higher economic costs of producing organic corn and soybeans were more than offset by the higher prices people are willing to pay for these crops.

The Export Market for Organics

Though the U.S. has seen some tough times lately in terms of exports, with China refusing GMO corn shipments, and Russia now banning all corn and soy shipments from the U.S. due to concerns about GMO contamination, there is still a growing export market and ample opportunity for organic farmers.

Should the U.S. start growing more of its own organic bananas, coffee, olive oil, and mangos, we could see over a billion dollars in growth recaptured that currently is sent overseas for the import of these goods.

USDA is Even Getting in on the Organic Action

The USDA has been slow to support organic farmers, but the agency will soon offer the first-ever forum discussing “the Outlook for Organic Agriculture,” as part of the 92nd annual Agricultural Outlook Forum later this month. A panel of experts is expected to discuss opportunities in the agricultural market as consumer demand for organics goes sky high.

You can find out more about the USDA 2016 Agriculture Outlook Forum at www.usda.gov/oce/forum/index.htm.

Make no mistake, Monsanto; with demand for organic produce, dairy, meat, eggs, bedding, soaps, lotions, and even organic shoes escalating every year, you will soon have no buyers for your GM, herbicide-laden, non-organic crops. You won’t be able to force us into eating them either; there will be too many other, healthier options.