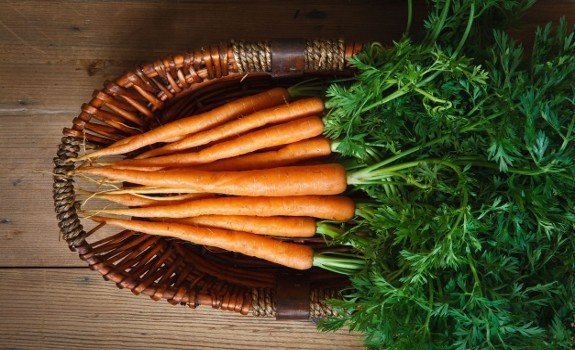 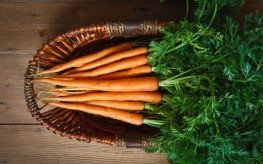 Over the past few decades we’ve heard quite a lot about the benefits of beta-carotene – the vitamin A precursor in brightly colored vegetables like carrots. As a matter of fact, many of the health benefits of carrots were assumed to be due to its concentration of beta carotene. But researchers in Denmark have found that another compound—falcarinol—has equally promising benefits and could even help reduce your risk of colon cancer.

Falcarinol is a natural pesticide. This isn’t something that is sprayed on carrots, but rather is produced naturally by the plant. And this natural protectant, which guards the carrot roots from disease and fungus, is believed to also guard you from cancer when eaten on a regular basis.

Researchers with the University of Southern Denmark in conjunction with the Danish Institute of Agricultural Sciences (which has now merged with the University of Aarhus to become the Faculty of Agricultural Sciences) found that rats given raw carrots and rats given falcarinol directly were less likely to develop colon cancer than a control group. These rats had precancerous tumors and those eating carrots and falcarinol were a full one-third less likely to have those tumors develop completely.

“The discovery makes it possible for us to authoritatively recommend which vegetables should be eaten to protect against cancer,” said lead researcher Morten Larsen. “With more research, we hope we can give more precise recommendations on the amount of carrots and other vegetables a person should eat daily.”

Few people have heard of falcarinol, let alone know about its anti-cancer benefits. Now the researchers are working on growing a carrot with higher falcarinol levels, and testing to see how cooking and freezing affects the concentration.

So far, they’ve found that raw carrots are best, that falcarinol is sensitive to light and heat. Also, it appears from their initial research that the falcarinol is maintained during the freezing process.

So how can you get the most anti-cancer benefits from your carrots? Juicing is an excellent option. You can combine the facarinol-containing root vegetables with other beneficial vegetables like spinach, cucumbers, and parsley. Incidentally, celery, parsley, and parsnips also carry falcarinol. Combining carrots with these other falcarinol-rich sources could significantly boost your cancer-fighting abilities.