Due to massive government subsidies given to farmers to grow genetically engineered crops in the past, U.S. food manufacturers and farmers are now being caught blindsided by the sweeping demand for non-gmo and organic crops. In a twist of irony, this is driving a massive increase of organic crop imports from nations that are largely free of bioengineering.

“Most of the corn and soybean shipments become feed for chickens and cows so they can be certified organic under U.S. Department of Agriculture guidelines. Organic poultry and dairy operators shun feed made with seeds from Monsanto Co. and other domestic suppliers in favor of foreign products even as the U.S. remains the world’s top grower of corn and soybeans. As a result, imports to the United States of Romanian corn rose to $11.6 million in 2014 from $545,000 the year before. Soybean imports from India more than doubled to $73.8 million.”

After countless years of the public voting with their dollars against GMO food and its associated toxins, the impact is now measurable on every level of the supply chain. At the top, Monsanto is sustaining continual financial loss, major chains like whole foods are being forced to go GMO free, and product manufacturers unwilling to switch are instantly losing market share.

A quick look at the trend confirms the sustained strength of growth in organic food sales is real: 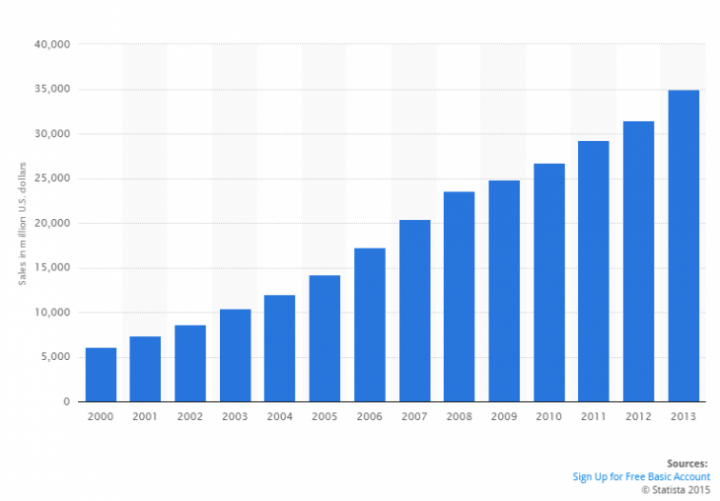 It seems the American GMO experiment is facing hardships having failed socially, financially, and medically. Farmers are seeing the writing on the wall and following the new ‘organic, non-GMO gold rush’ and rapidly switching to meet demands.

The U.S. Department of Agriculture (USDA) recently announced a $66.5 million grant, part of which will support the department’s Organic Agriculture Research and Extension Initiative (OREI). One of OREI’s goals is to identify marketing and policy constraints to the expansion of organic agriculture.

According to Nathaniel Lewis, senior crop and livestock specialist at the Organic Trade Association (OTA):

“The OREI grant will also help fund research on organic weed control methods, which are crucial. “Weeds are the number one barrier to farmers transitioning to organic from a cultural and technical perspective.”

Perhaps the USDA, in its search to identify “marketing and policy constraints” should review its own agency scientist and policy makers who have been attacked, suppressed, and threatened by the biotech industry for continually attempting to expose the dangers of GMO food and its associated toxins.