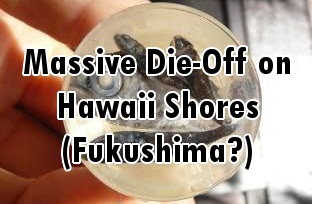 Mainstream media in Hawaii, via the Star Advertiser, has reported that between 500 and 800 squid and lantern fish were found dead or close to dead in the Nawiliwili Harbor area of Hawaii on Monday, January 27, prompting both state and federal officials to investigate the cause of their die off. What they won’t come right out and tell you is that this is just one of the many species possibly dying from the radioactive fallout of Fukushima. The Department of Land and Natural Resources (DLNR) says that lantern fish are typically found in the very deep ocean, and they ‘aren’t sure’ why they are showing up dead on Hawaii’s shores.

The public is being asked to look for more dying lantern fish and squid on nearby beaches and to report it to the Eyes of the Reef Network.

Read: 8 Signs Fukushima Radiation is Blasting the Oceans and U.S.

Hundreds of whales have been radiated to death and people still want nuclear energy to fuel this planet? Right after the radiated whale story ran, the World Nuclear Association, the mouthpiece of the nuclear industry, asked nationalreport.net to remove it. Fortunately the site refused to comply and kept the story up, even though the WNA received an onslaught of calls and emails asking for more information.

If we even live past this catastrophe, it is time to completely shut down all nuclear plants throughout the world and go straight to renewable, clean fuels. We’re sick to death (and dying) of a World Order that will poison us all for profit. A Stanford scientist has already shown that we can run the planet 100% on sun, wind, and hydropower quite easily. Even more controversial is that there is zero-point energy availablet o the world too;  it’s just being kept from us to keep us enslaved.

While free energy has not been ‘allowed’ due to economics, not science, it is time to claim our right to it, our lives might very well depend on it.